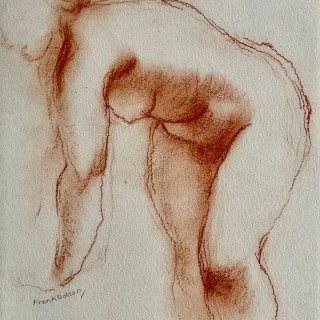 Provenance:
Collection of Peter Ward-Jackson, curator of the V&A.

A sculptor, draughtsman and painter in oil and watercolour. Born in London, Dobson first studied at Leyton School of Art and later at the City and Guilds School, Kennington. During World War I he enlisted in the Artists’ Rifles and continued working – his large oil The Balloon Apron was acquired by the Imperial War Museum. After the war Dobson met Wyndham Lewis and exhibited with Group X in 1920 and he held his first one-man show as a sculptor at the Leicester Galleries in 1921. During the interwar Dobson consolidated his reputation as a sculptor and together with Epstein was call “a keeper of tradition” – bridging classical and modern sculpture. In 1946 Dobson was appointed professor of Sculpture at the Royal College of Art.

He is represented in many public galleries including the Tate Gallery.