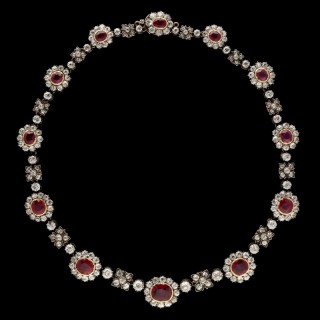 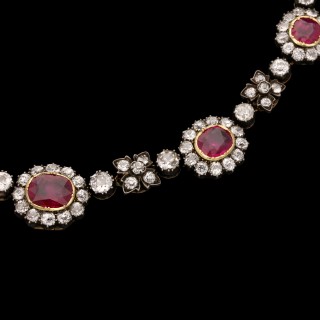 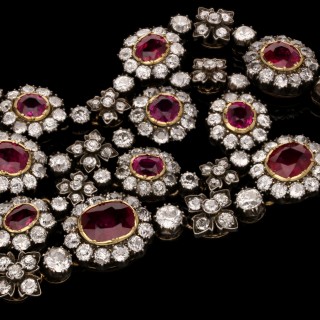 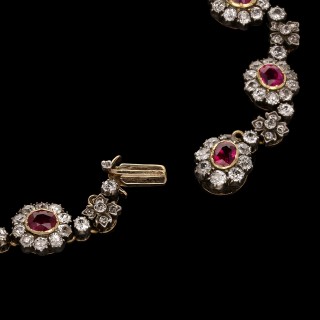 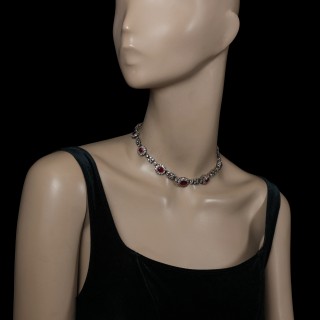 A stunning antique French Burmese ruby and diamond necklace c.1870, the necklace formed of twelve graduated cushion shaped clusters each centred with a Burmese unheated ruby in a gold cut down collect setting and surrounded by old cut diamonds set in silver, all interspersed with stylised four petalled floral motifs set with diamonds between two single diamonds, the necklace fully backed with gold and with a concealed tongue and box clasp. This wonderful collar length necklace is finely articulated and sits perfectly around the base of the throat. The rubies are a beautiful intense colour and have been certified by SSEF and the diamonds are predominantly old mine cuts, a term used to describe a cushion shaped diamond with a small table facet, high crown and polished culet, features which allow these stones to have a huge amount of fire and life, even in dimly-lit environments. The central cluster has a tiny hinged loop behind it which folds down allowing a pendant drop to be attached the necklace thereby offering the chance to personalise the necklace with your own additional jewel. This necklace has no doubt been worn to many a special event over the last hundred and fifty years and is now ready for a new life and a new neck to grace.