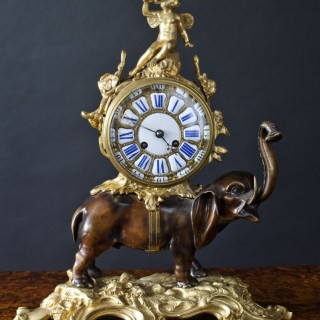 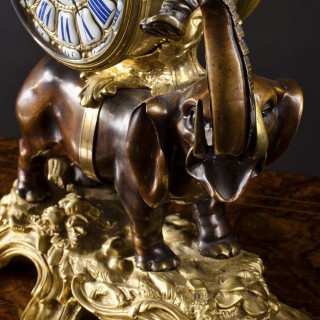 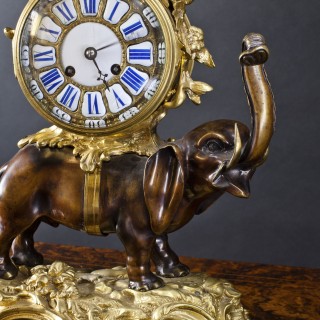 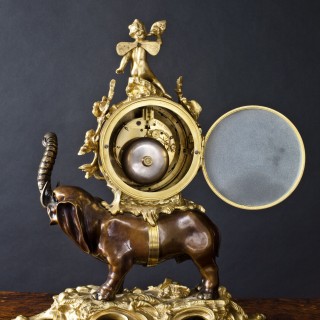 A beautifully cast bronze Elephant clock with raised trunk ( a sign of good luck) standing on an ormolu Roccoco base supporting the cylindrical clock movement.

Gilded bronze dial with individual enamel cartouches for the blue Roman hour numerals and the Arabic minute numerals. The cartouches are enamel on copper. Finely cut and blued steel hands, the dial surmounted by a figure of Armor (the God of love, son of Venus) blowing a shell.

Eight day movement with outside countwheel striking the hours and halves on a silvered bell. The movement marked ‘MF’ and numbered 4958, the long pendulum also marked in the same manner.

The Elephant has a wonderful patination and the ormolu base and mounts retain their original gilding. C 1860

The MF mark is most likely to be for Miroy Freres. ‘Watchmakers and clockmakers of the world’ by Brain Loomes lists Miroy Freres as working in Paris from 1851 to 1860. They later also opened a shop in London in 1863 which later became Miroy,Requier & Co. And were still trading both in Paris and London until 1881.
In 1616 the King of Siam gave an elephant as a present to Louis XVI which was proudly shown off in the Menagerie at Versailles, the elephant was modelled on the Siamese elephant. The original design for this type of elephant clock was Joseph de Saint, Germain and Jacques Caffiere c.1745