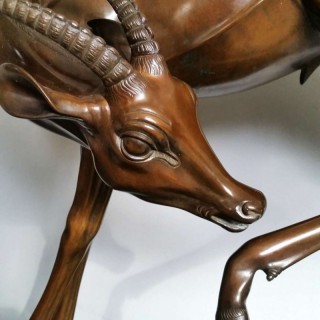 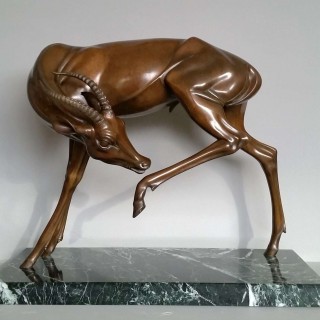 Bronze, signed by the tail.

Sirio Tofanari was one of Italy’s most celebrated animal sculptors.

This model is the last of four versions of this sculpture originally conceived in 1924, each successive variant becoming more streamlined.

Around 1955 Tofanari gave Aldo Marinelli, owner of the Marinalli Foundry in Florence, a number of plaster models to cast into bronze. This particular gazelle was amongst them. The agreement was that Tofanari would detail the waxes and oversee the patination. Tofanari died in 1969 but the foundry still cast with the family permission until 1976 when the foundry was sold and the name of the foundry changed.

This cast is before 1976, it is signed on the tail as opposed to the raised leg of the later casts, it also has a quality and finish with fine detail. the modern casts of this subject are marked as posthumous after legal action by the heirs.