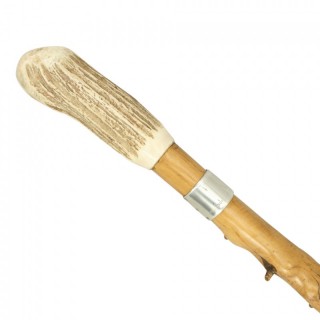 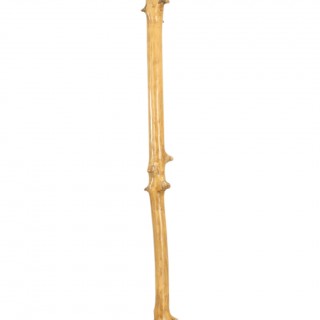 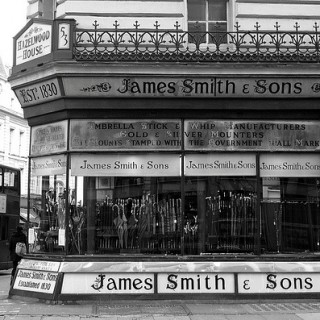 A good gentleman’s walking cane with silver band and stag horn handle by James Smith and Sons. The shaft is made of hardwood with short branch off shoots, the silver collar has a London hallmark dating 1994 with JS & Ss. This is the maker’s mark of James Smith and Sons.
All in excellent original condition, metal ferrule is missing.

HISTORY OF JAMES SMITH & SONS UMBRELLA SHOP:- taken from their website.
In 1830 James Smith founded the famous firm of James Smith and Sons at Foubert Place in London’s West End. His son moved the business to New Oxford Street in 1857; he also opened six other businesses including a hatter’s and a barbershop. He had eight sons and a daughter, and when he moved to Tasmania with two of his sons to take up farming, he left the others to run the business at home. In 1930 it was his grandson Mr Mesger (great grandson of the founder) who moved back from Tasmania to take over the running of the business.
A branch shop was opened just off Savile Row and it was from here that umbrellas were sold to Gladstone, Bonar Law and Lord Curzon, among many other dignitaries. When this shop was pulled down to make way for a new road, the branch moved to New Burlington Street, but this was unfortunately destroyed in the Second World War.
The business in umbrellas has always thrived, perhaps because of the English weather, but also because of the outstanding reputation the company has for umbrellas and walking sticks and the repair service that they offer for them. The company was also one of the first to use the famous Fox Frame and similar frames have been used ever since.
For a long time the company specialised in making ceremonial umbrellas, maces, and gentlemen’s canes and these are in service around the world. Until the 1920’s the cane or stick was an essential part of the well dressed male’s attire. During World War I many hundreds of thousands of military ‘swagger sticks’ were sold to soldiers, but today the cane or stick is used mostly as an aid to walking.
Much of the business for sticks comes from America where there has always been a shortage of good sticks and canes. One American client even asked the company to make him a stick in every English wood possible – he received over 70 sticks in total!
Apart from being the leading umbrella company for over 180 years and the first name in sticks and canes, the shop on New Oxford Street is a perfect example of Victorian shop front design. It has remained virtually unaltered in 140 years; most of the fittings were designed and made by a fitter employed by Mr Smith.

The First James Smith started our tradition of umbrella making in 1830 when he opened a small shop in Fouberts Place, off Regent Street. He made the umbrellas at the back of the shop and customers were served at the front. That tradition is still maintained in our New Oxford Street premises. Our workshops are situated in the basement and it is there that we still make some umbrellas and walking sticks, although these days we sell so many that some have to be made specially for us by other small family firms. The design and materials of the gentleman’s traditional umbrella have changed little over the years, apart from the fact that most of the covers nowadays are made from nylon. It is generally recognised that London has been the home of the best umbrellas and walking sticks and we are pleased to be able to continue that tradition.