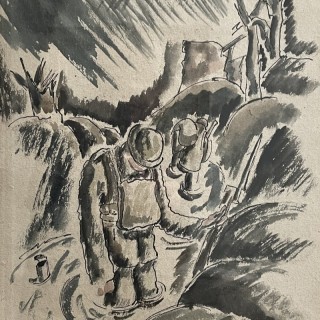 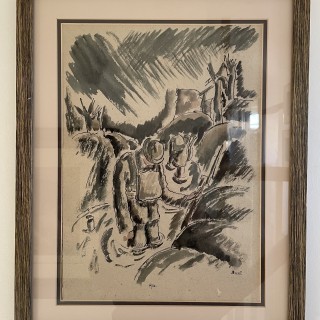 The Horrors of War

George Bissill was the son of a railway worker and miner from Langley Mill, Derbyshire. At the age of 13 he left school to work in the mines, drawing and painting in the evenings and during any spare time. In October 1915, at the age of 19, signed up for the army and joined the King’s Royal Rifle Corps. He was sent to the front and because of his mining experience he was soon detailed to work underground, tunneling beneath the German lines, at one stage being buried alive for almost 3 hours. In 1918 he was severely gassed and was eventually invalided out of the army and on his return he won a grant to study at Nottingham School of Art, beginning a series of paintings and drawings of mining life and recollections of his war experiences. In the early 1920 he moved to London, initially working as a pavement artist. His drawings and talents were noticed and encouraged by the Arts League of Service and in 1925 he held an exhibition at the Redfern Gallery. He went on to exhibit his figure subject and landscapes at the Royal Academy, New English Art Club and elsewhere and works by him are in the collection of the Tate Gallery, London.