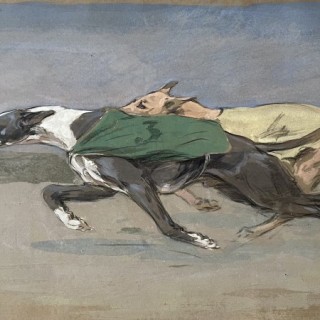 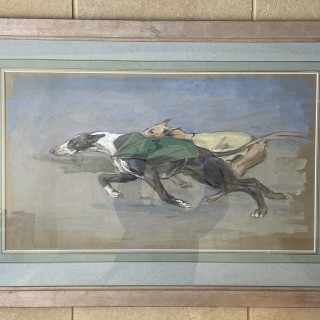 Watercolour and pen and ink
Framed

Armour was born in Waterside, Lanarkshire and studied at St Andrews University, Edinburgh School of Art and the Royal Scottish Academy Schools. He was a close friend of Joseph Crawhall and visited Tangiers with him and Robert Alexander in the 1880s. In the 1890s he settled in London, sharing a studio for some time with Phil May and becoming a regular contributor of illustrations for Punch, The Tatler, Country Life and The Graphic as well as illustrating many sporting books. In 1910, he studied military equestrianism at the Spanish Riding School in Vienna. During the First World War he commanded the depot of the Army remount service and from 1917 to 1919 served with the Salonika Force. By the end of the war he was the Director of Remounts in that area and was awarded the OBE for his services. He worked in oil, watercolour and pastel, painting sporting subjects and exhibiting at the Royal Academy, Royal Scottish Academy and elsewhere and later lived in Malmesbury, Wiltshire. Works by him are in the collections of Aberdeen Art Gallery, the National Galleries of Scotland and in other private and public collections.