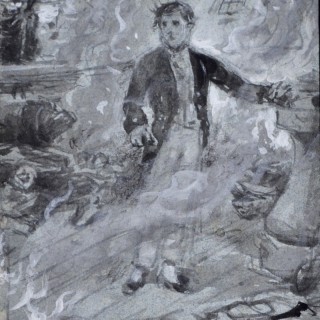 Inscribed with title beneath the mount
Grisaille watercolour heightened with white on blue paper
Unframed, in conservation mount.

The present work is an illustration for Felicia Dorothea Hemans 1826 poem Casabianca. The story deals with an incident during the Battle of the Nile when the young son of a French commander stayed at his post until the ship exploded:

“The boy stood on the burning deck
Whence all but he had fled;
The flame that lit the battle’s wreck
Shone round him o’er the dead. …”