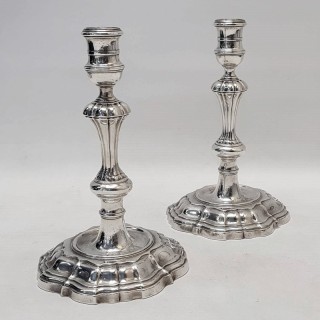 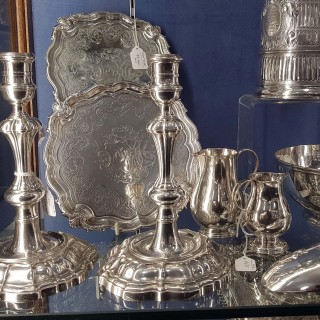 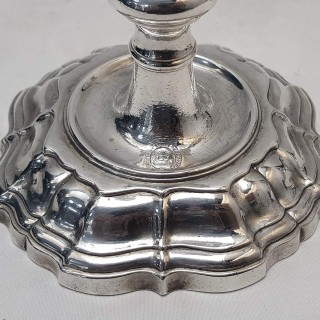 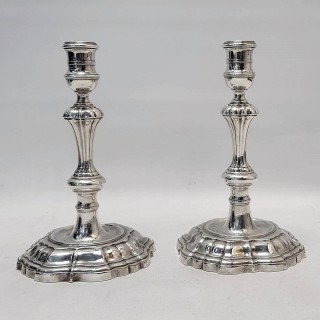 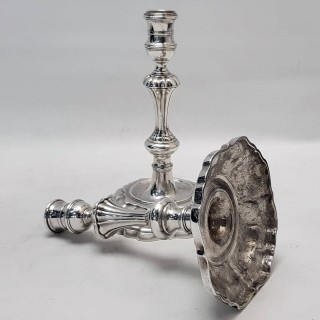 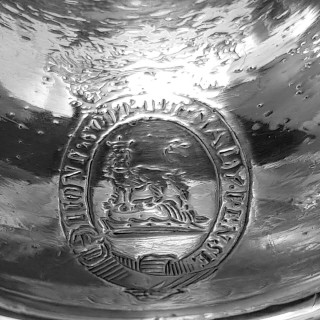 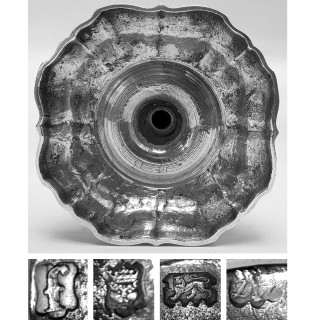 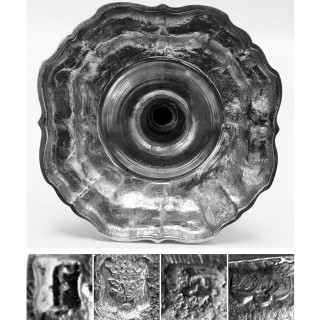 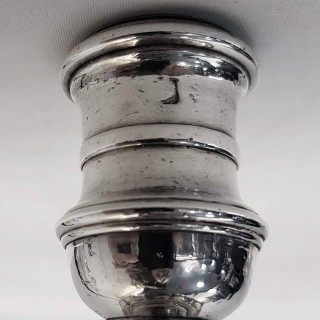 An excellent quality pair of antique silver candlesticks having baluster stems and shaped bases. Heavy cast silver and good original colour. Each is hand engraved within the well of the base with an insignia containing the royal motto.

Marks. Stamped around the bottom inner edge with a full set of clear English silver hallmarks, one sconce with the lion mark (worn). The makers marks are slightly mis-struck but clearly for David Willaume II.

Insignia. The motto ‘Honi Soit Qui Mal y Pense’ is contained within a belt and buckle border, a lion crest within, a crown above.

David Willaume I, Huguenot maker, born 7 June 1658, son of Adam Willaume, goldsmith of Metz on the Pont des Morts. His first mention in London was in 1686 at the Windsor Castle, Charing Cross. Married Marie Mettayer 1690. Free 1693/94 as David Williams. First mark as largeworker undate probably 1697. Second and third marks 1719. His children were Anne, born 1691, wife of David Tanqueray, David, born 1693, and Adam and Suzanne, born 1694 and 1696, died in infancy. Willaume seems to have retired about 1728 (when David II entered a mark of distinctly different type to his father) and he purchased the Manor of Tingrith, Bedfordshire. Died circa 1741.

David Willaume I was an important silversmith and enjoyed the patronage of the wealthiest clients in England. His many outstanding pieces display the highest qualities of rich design and impeccable execution. Among his impressive list of important works are the magnificent pair of wine coolers (Duke of Devonshire), the Luton Hoo toilet service, the pair of ivory mounted vases (British Museum), and the punchbowl and cover (Trinity Hall, Cambridge).

Cast candlesticks started to appear circa 1685, these are much heavier in weight and capable of withstanding greater wear. The first loaded candlesticks appeared circa 1765 and are made of sheet, and not cast.

Both in very good condition. The engravings display some wear.