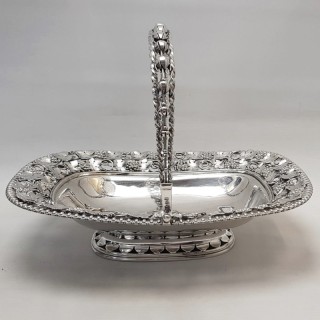 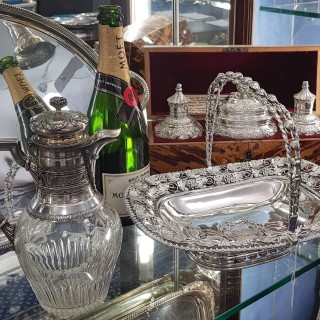 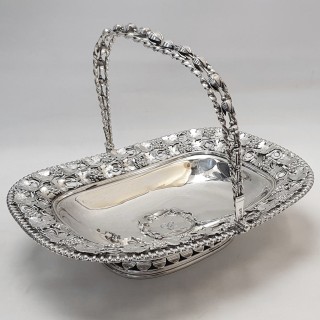 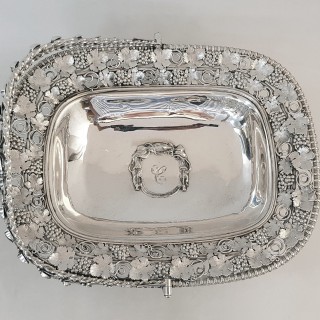 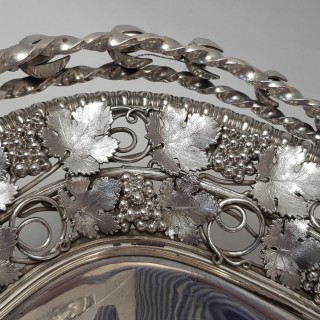 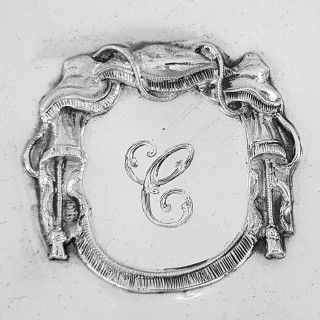 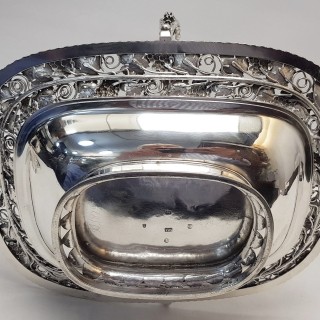 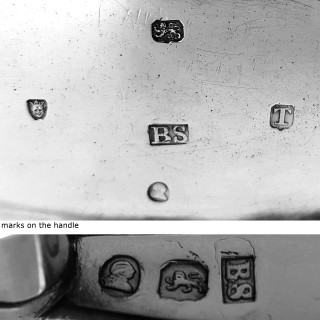 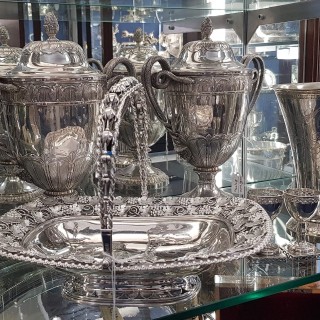 A very fine antique silver basket of rectangular form with swing handle and pierced silver foot. Suitable for bread, cakes and candy, flowers and fruit. Excellent quality and weight as you’d expect from this highly desirable maker. The openwork vine borders are among the most distinctive and accomplished achievements of Benjamin Smith and similar to those of Paul Storr, not surprisingly as both firms manufactured almost entirely for Rundell and Bridge at this time. The centre has an engraved “C” within an applied cartouche with swags and bells.

Marks. Stamped underneath and on the handle with a full set of English silver hallmarks. The applied central cartouche is marked for maker “CB”.

Benjamin Smith II, London silversmith. Originally of Birmingham, born 15 December 1764, first marriage 1788. Grimwade records first mention of Benjamin Smith through a 3rd party recommendation as ‘an Ingeneous Chaser’ in 1790 to Matthew Boulton at Birmingham. By September 1792 the firm of Boulton and Smith, latchet manufacturers was in existence.

By his first marriage Smith had four sons, of whom Benjamin was the eldest and three daughters, and by Mary Shiers a fourth daughter in 1803 at Greenwich. His third son Digby, born 2 June 1797, may be assumed to be the godson of Digby Scott.

It appears that Smith was of a difficult and probably irascible nature and is this borne out by the variations in his entry of marks with and without partners. His firm was of course, together with Storr, manufacturing almost entirely for Rundell and Bridge, and it seems that the later may have supported Smith’s move to London. The firm’s most important production is probably The Jamaica Service of 1803 in The Royal Collection. The silver-gilt trays, baskets, and wine coasters with open-work vine borders are among the most distinctive and accomplished achievements. The designs, so closely related to those of Storr, most almost certainly stemmed from central control by Rundell and Bridge.

Antique Silver Fruit Baskets are nearly always described as cake baskets but were more commonly used for bread and fruit. Although 17th century versions are known to exist they were not commonly found until about 1735 onwards. Early examples usually have side handles or no handles and tend to be considerably heavier than George III examples and later.

This basket is in very good condition.