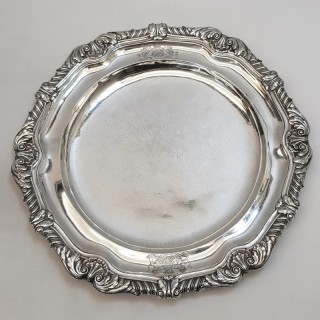 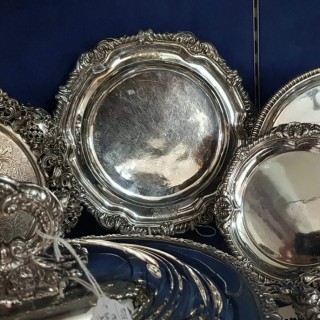 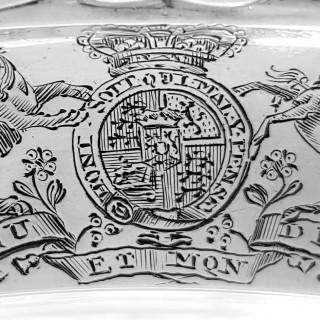 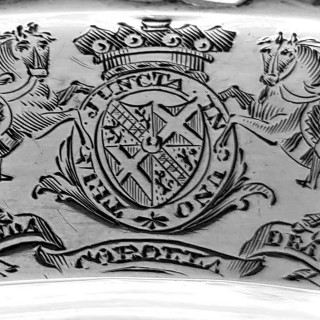 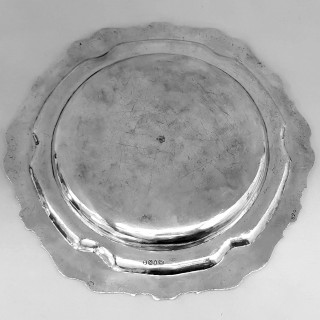 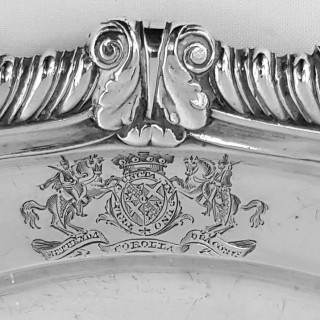 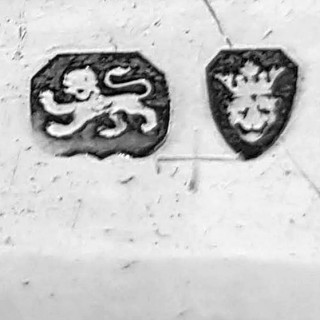 A handsome antique silver dinner plate with plain styling and magnificent shell and gadroon borders. Excellent quality and manufacture as you’d expect from this world famous silversmith. Hand engraved to the top and bottom rim there are two crests and mottos for the Marquis of Londonderry* and the Order of the Bath. The underside bears the pattern number 820.

Marks. Stamped on the underside with a full set of English silver hallmarks, all clear and easy to read.

Paul Storr (28 October 1770 – 18 March 1844 ), was one of the most talented silversmiths of the late Georgian period. Today his legacy of exceptionally well crafted silver can be found worldwide in museums and private collections. Son of Thomas Storr, a silver chaser, apprenticed 1785 to Andrew Fogelberg. First mark, as plateworker, in partnership with William Frisbee 1792. Second mark alone 1793. 3rd mark 1793. 4th mark 1794. 5th mark 1799. Subsequent 6th – 12th marks entered 1807-1834. By the beginning of the nineteenth century, established as one of London’s top silversmiths, he was producing commissions for Royalty. In 1801 he married Elizabeth Susanna Beyer with whom he was to have ten children. In 1807 Paul Storr entered into a working relationship with Philip Rundell and by 1811 was a partner, and managing the workshops for Rundell, Bridge & Rundell. During this period he kept his own marks and separate workshop, however Rundell, Bridge & Rundell were appointed Goldsmith in Ordinary to George III in 1804, and through them his reputation as a master silversmith grew. His talents lay in being able to transform ideas and designs from Rundell, Bridge & Rundell’s designers, William Theed II and later John Flaxman II. Rundell, Bridge & Rundell’s reputation grew due to the subsequent patronage of the Prince Regent (later George IV). Storr left RUNDELL, BRIDGE & RUNDELL in 1819 and went into partnership with John Mortimer, the assistant of a retiring retail goldsmith and jeweller, WILLIAM GRAY, of 13 New Bond Street. The firm was renamed STORR & MORTIMER and Storr concentrated on the manufacture of goods for Mortimer to sell in the shop at 13 New Bond Street. Storr and Mortimer, now manufacturing and retail goldsmiths, jewellers and silversmiths with an influential clientele, moved to 156, New Bond Street, in 1838. Storr retired to Tooting in 1839 and died in 1844.

Armorial 1 is the Order of the Garter (the Royal Coat of Arms), the highest order of chivalry. The motto “Honi Soit Qui Mal y Pense” means “Evil (or shame) be to him that evil thinks.” The motto below “Dieu et mon droit “ means “God and my right (the motto of the British monarch).

Armorial 2 is the Order of the Bath, a British order of chivalry. The Order’s motto “Tria Juncta In Uno” means “Three joined in one”. The motto below “Metuenda Corolla Draconis” means “the dragon is to be feared” and belongs to the Marquis of Londonderry.

This silver platter is in good condition with some signs of use over the years. Excellent quality as you’d expect from this much prized maker. The hand engraved crests and mottos are still sharp. Good colour. There is some light surface scratching, these plates have not been erased, and a few tiny pin prick dents. All original and fully functional.