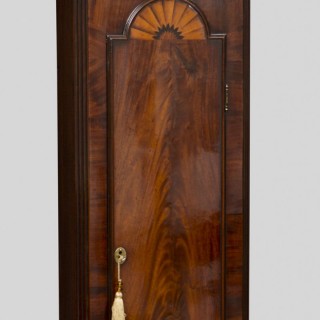 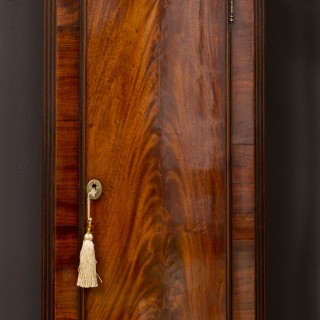 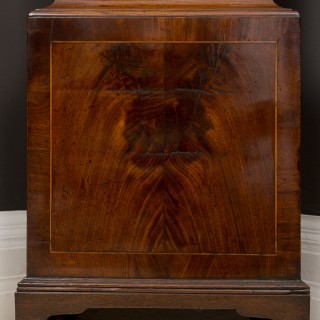 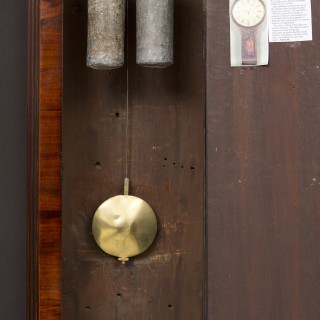 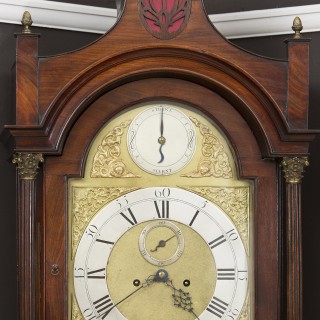 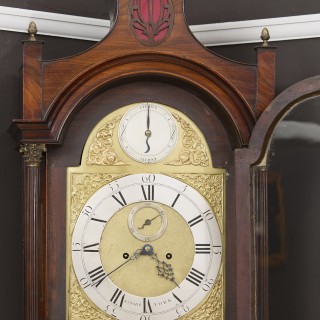 A George III Longcase clock by Jonathan Storr of York.

The mahogany case with long door featuring flame mahogany and Sheraton fan inlay to the arch top with Porcupine decoration. The base stands on bracket feet and is inlaid with boxwood, reeded canted corners to the trunk below the Pagoda top hood with finely turned reeded pillars with Corinthian capitals. Silk backed side and central frets. The hood surmounted by three original brass finials, almost certainly this clock must have been commissioned for an ‘important client’.

The fine quality eight day movement is set between two brass plates striking the hours on a large bell and retains it’s original lead weights and pendulum. The brass dial signed J.Storr, York is nicely engraved and features a seconds ring, calendar aperture and strike/silent dial in the arch.

The Storr family were a famous clockmaking family, mostly Quakers who originated from Ostwick in East Riding then moving to Summercroft, Selby and later to York. Marmaduke Storr was born in 1667 his youngest son from several children was Batty born 1710, died 1793, Jonathan Storr (the maker of this clock) was Batty’s eldest surviving son born in York in 1739 and died in 1805. Although brought up as a Quaker he evidently left his faith as he was baptised in the Church of England as an adult in 1768. He married in the same year in York to Elizabeth Silbeck. His wife died in 1784 aged 50 years. His shop was at the corner of Minster Gates in York. In his will dated 24th January 1804 he left most of his goods to his brother, William and his servants. William was also a clockmaker who worked for several years in London. In 1790 he moved his shop to Low Pottergate, other Longcase clocks are known by him as well as an ‘Act of Parliament’ (or Tavern) clock. C.1765