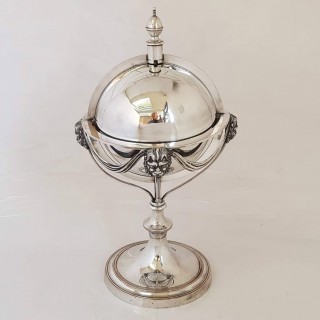 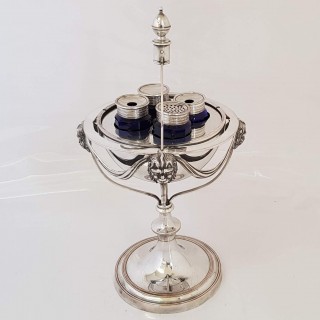 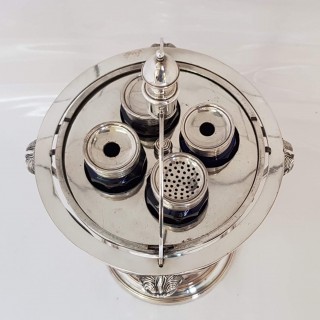 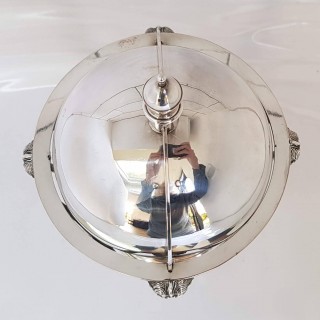 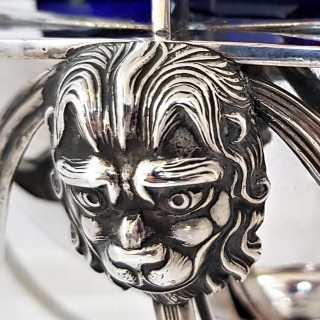 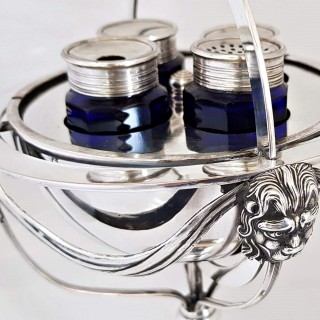 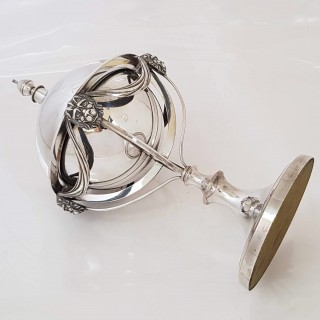 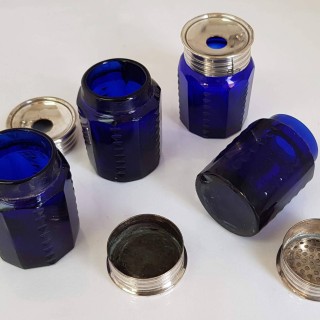 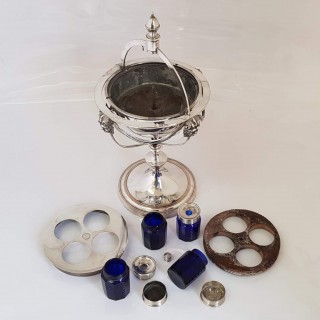 A rare and collectible conversation piece made in Old Sheffield plate. This elegant novelty inkstand, made to sit on an 18th century Englishman’s desk, is in the form of a globe and by pressing down the top finial the two flaps open to access the four Bristol blue glass bottles. Two bottles are for ink, one for pounce (a fine powder to dry the ink) and a fourth to keep spare nibs. The centre rim is decorated with swags and lions masks.
Height 27cm. Diameter 14cm. Bottle height 5cm.
Unmarked.
Old Sheffield plate.
Circa 1795.

During the 1790’s the globe inkstands were being produced in Sheffield, particularly by Roberts, Cadman & Co. This example with four bottles is the larger, more expensive version and would would have cost up to 5 guineas in those days. Few have survived with their complete set of bottles. Ref: Gordon Crosskey “Old Sheffield Plate, A History of the 18th Century Plated Trade”.
Old Sheffield plate (circa 1770-1840) was a process used in Georgian times to make articles from a sheet of copper fused with a thin sheet of sterling silver. This process predates the silver plating done today (electroplating) which started in the 1840s. The majority of these silverwares were made in Sheffield, UK (hence the term Old Sheffield plate) which was a major UK centre for silver production. Most articles made from Old Sheffield plate are unmarked. The date can be determined from the style and manufacture.

The inkstand is in very good condition. The spring opening mechanism is still functional. The silver finish is in good order with just a little copper showing through on the highlights. The inside has the original tinned finish and the original wooden insert which holds the bottles. There is some very minor fritting to the bottles as would be expected for a set of Georgian glass bottles in use over 2 centuries.