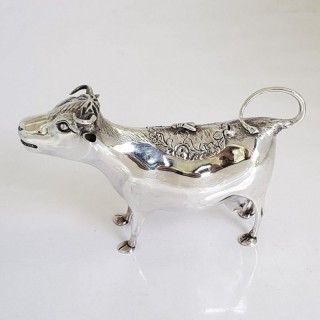 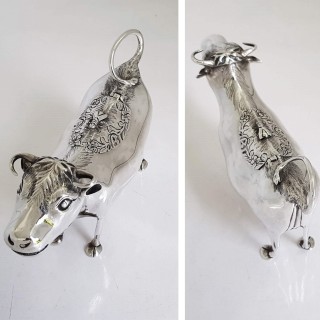 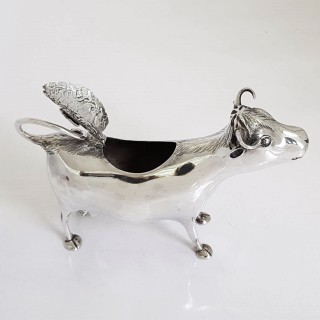 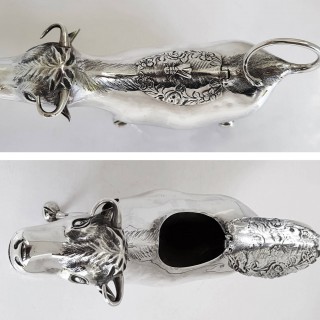 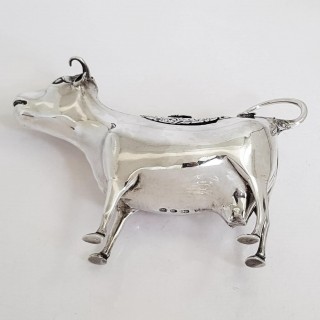 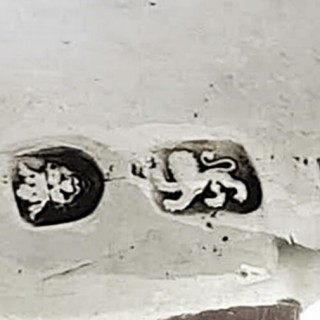 An antique silver cream jug in the form of a model cow with a handle in the form of a looped tail. The saddle shaped lid on the cow’s back has a finial in the form of a fly; it lifts to fill the jug with cream which is poured out of the cow’s mouth. Simple figuring and naive expressive face. The body has charmingly realistic hair chased on top.

JOHN SCHUPPE
John Schuppe, no record of apprenticeship or freedom, believed to be an immigrant Dutchman. 1st mark as largeworker 1753. Jugs in the form of standing cows were made in London in some quantity during the second half of the 18th century and most bear the mark of John Schuppe, and were made between 1753 and 1773. His mark is occasionally found on small decorative items such as figural tapersticks. Although Schuppe was the first to make cow creamers from silver, their form is much older. The earliest form was back in 4th century BC Egypt where pottery jugs in the form of cows first appear. They then reappear in early part of the 18th century in Holland. It is from here that Schuppe must have taken his inspiration, and the form which he pioneered was so popular that copies of his style of creamer were made for the next 200 years. One of his cow-shaped creamers (1759-60) is in the collection of the Victoria & Albert Museum, London, with the tail as the handle and a lid on the back with a giant fly on top. Marks are always on the underside of the body in a line, and it is uncommon for the marks to be worn.

Cow creamers. One maker, John Schuppe a Dutch silver maker, specialised in these between 1755-1775 and his creamers are highly prized. 19th century and later examples are usually Dutch or Hanau silver although English cow creamers can be found. All these creamers follow the same basic form, with a looped tail and a saddle-shaped lid with a finial in the form of a fly. Both silver and silver-gilt versions are known, and variations occur on the type and amount of hair on the body and head.

The little silver cow is in very good condition. Stamped underneath with full English silver hallmarks. Fully functional.
Please note that this item is not new and will show moderate signs of wear commensurate with age. Reflections in the photograph may detract from the true representation of this item.