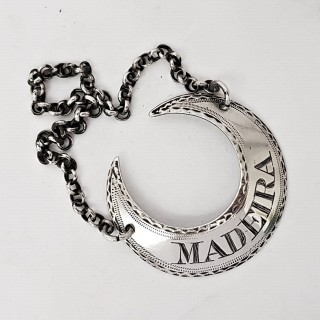 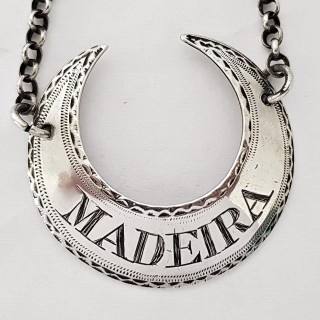 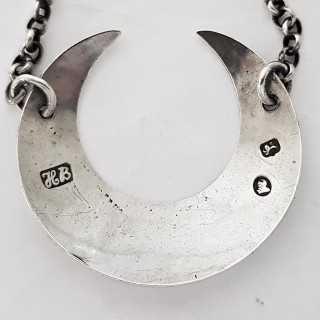 Highly collectible. An antique silver wine label (also known as a bottle ticket) by the sought after lady silversmith Hester Bateman. Of crescent form, with bright cut borders, and suspended on a rolo chain. The label is engraved “Madeira” to the centre.
Weight 8 grams.
Width 4cm.
London circa 1780.
Made by Hester Bateman.
Sterling silver.

Wine labels, also known as “bottle tickets”, appear to have originated in the second quarter of the 18th century. They were made in many attractive designs and are a popular collecting field. Generally, the label is suspended around the neck of the bottle by a chain, although some are formed as plain collars which slip over the neck, or formed as a plain rectangle hinged from a wire ring. Among the many good makers are Hester Bateman and family, Phipps & Robinson, Samuel Bradley, Mary Binley and Paul Storr.
Madeira is a fortified wine produced and bottled in Madeira – a Portuguese island off the coast of Morocco – using specific grape varieties, aged by the unique heating system, making use of the same ancient ageing techniques that have passed from father to son, from one generation to another.

The silver label is in very good condition. The engraving is still sharp. Stamped on the back with The duty mark, lion passant and makers mark. No date letter. It was not required at that time to fully hallmark small silver items.