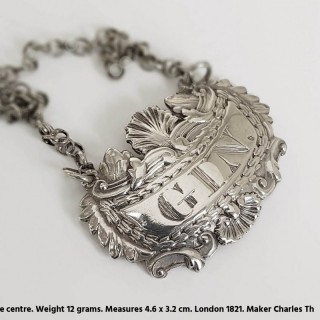 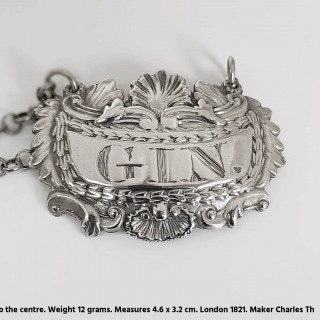 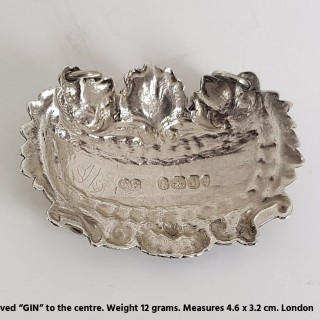 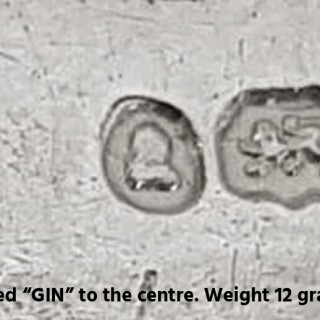 CHARLES THOMAS & GEORGE FOX
The Fox family of silversmiths. Charles Fox’s mark was entered in 1801, He worked until 1827. His son Charles Fox II joined his father in 1822 and continued until about 1842 when his sons George and Charles Fox took over the family business. George entered a joint maker’s mark in 1842 with his brother Charles Thomas Fox, from 139 Old Street, where they are listed until 1852 as working silversmiths. C.T. & G. Fox then moved to 13 Queen Street (renamed 13 Bateman Street in 1885), Soho, where they are listed as working silversmiths. Charles Thomas Fox retired on 31st December 1860 leaving George Fox as sole partner in the firm of C.T. & G. Fox. The business moved in 1891 to 50 Berwick Street , Soho, where in 1892 they are listed as manufacturing silversmiths, repairs, gilding, plating etc. to the trade.

Wine Labels, also known as “bottle tickets”, appear to have originated in the second quarter of the 18th century. They were made in many attractive designs and are a popular collecting field. Generally, the label is suspended around the neck of the bottle by a chain, although some are formed as plain collars which slip over the neck, or formed as a plain rectangle hinged from a wire ring. Among the many good makers are Hester Bateman and family, Phipps & Robinson, Samuel Bradley, Mary Binley and Paul Storr.

This label is in very good condition. Sharp detail. Fully stamped on the reverse with a full set of English silver hallmarks.