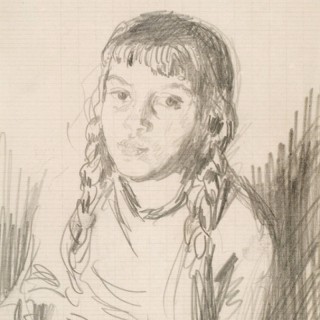 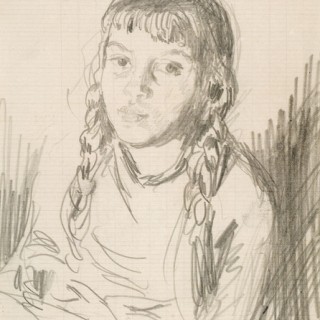 Provenance:
The artist’s daughter, Melisande Dark;
Robert O. Price (who purchased from above), by 1987.

Exhibited:
Sheffield, Graves Art Gallery, G L Brockhurst – A Dream of Fair Women, 1987, no.56.Drawn c.1935, the sitter is the artist’s daughter Melisande, his only child with his first wife Anaïs. Although she was christened Melisande Ranunculus, her father’s pet name from her was Baba. Despite the breakup of the marriage in the mid 1930s and Anaïs’s and Melisande’s departure for France, Brockhurst was a frequent visitor at their various temporary homes. They returned to England in the late 1930s, and after the eventual divorce settlement, mother and daughter remained in the Birmingham area until Anaïs died in 1980.

Brockhurst was born in Edgbaston, Birmingham. He was such a gifted draughtsman that he entered Birmingham School of Art aged only 12. He then went to the Royal Academy Schools, winning a gold medal and travelling scholarship to Paris and Italy. He held his first solo show at the Chenil Gallery in 1919. He was elected RA in 1937. An etcher and portrait painter, his society models included the Duchess of Windsor and Marlene Dietrich although many of his subjects were given poetic or classical names as titles and his wife and children were his main sitters. In 1939 he left his wife and went to New York with his young model Kathleen Woodward. He died in New Jersey in 1978. Examples of his work are in many public galleries.