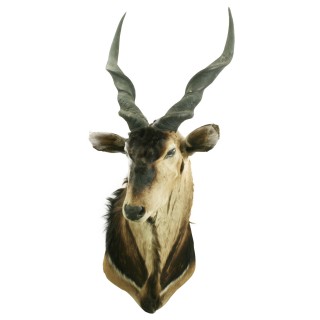 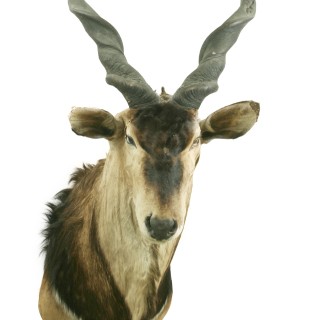 Big Game Taxidermy, Lord Derby – Giant Eland Taxidermy, Antelope.
A large and impressive prepared big game trophy shoulder mount of a Giant Eland. In recent years taxidermy has had a resurgence as a collectable and this Lord Derby – Giant Eland, being a well prepared and fine specimen, would hang very well on any wall. The taxidermy quality of this mount has suffered over the years with a split down the side of its neck, a few around its eyes and on top of its head. The Lord Derby Eland can be very difficult to hunt and is therefore one of the Big Game Hunters most prized hunting trophy. Ca.1960.

The giant elands are spiral-horned antelopes and are the largest species of antelope in the world with a body length ranging from 220 cm to 290 cm. They are native to Cameroon, Central African Republic, Chad, Democratic Republic of the Congo, Guinea, Mali, Senegal and South Sudan. Although the giant eland is larger than the common eland, the ‘giant’ actually refers to its large spiral horns and the name ‘eland’ is Dutch for “elk” or “moose”. They are known as an herbivore eating only grasses, foliage and branches. The giant eland is also called “Lord Derby’s eland” in honour of the 13th Earl of Derby (Edward Smith-Stanley). It was due to his efforts that the giant eland was first introduced to England between 1835 and 1851 when he sent botanist Joseph Burke to collect animals, either alive or dead, from South Africa for his museum and menagerie.