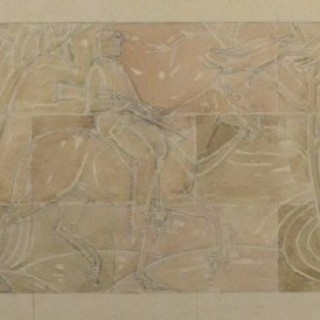 Gilbert Ledward was born in London. He was educated at St Mark’s College, Chelsea. In 1905 he entered the Royal College of Art to study sculpture under Edouard Lanteri and in 1910 he entered the Royal Academy Schools. In 1913 he won the Prix de Rome for sculpture, the Royal Academy’s travelling award and gold medal, which allowed him to travel in Italy until the outbreak of the Wold War I. During the war he served as a lieutenant in the Royal Garrison Artillery and was appointed as an official war artist in 1918.

Following the war he was largely occupied as a sculptor of war memorials including the Guards Division memorial in St James’s Park and the Household Division’s memorial in Horse Guards Parade. In 1934, supported by Eric Gill and Edwin Lutyens, he established a company called Sculptured Memorials and Headstones, which promoted better design of memorials in English churchyards. His war memorials after World War II include one in Westminster Abbey to the Submarine Service, Commandos and Airborne Forces.

Ledward was Professor of Sculpture at the Royal College of Art (1927-1929) and in 1937 was elected at Royal Academician. He became President of the Royal Society of British Sculptors and a trustee of the Royal Academy.

The present work is a design for an intended decorative frieze for the Italian Drawing Room of Eltham Palace. In 1935 the remains of the medieval royal palace of Eltham was rescued from decay by Stephen and Virginia Courtald who built an ultra modern Art Deco house to adjoin the existing Great Hall. They employed the architects John Seeley and Paul Edward Paget and the fashionable Mayfair interior designer the Marchese Peter Malacrida to design the strikingly glamorous 1930s interiors of the new house. The dramatic entrance hall was created by the Swedish designer Rolf Engstromer. In addition to the frieze design for the drawing room Ledward executed a series of sculptural reliefs representing the sporting and leisure interests of the Courtaulds.