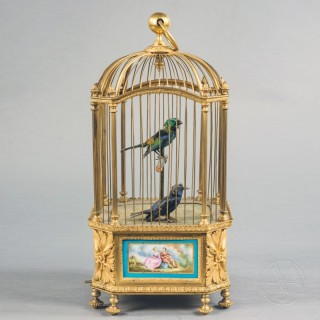 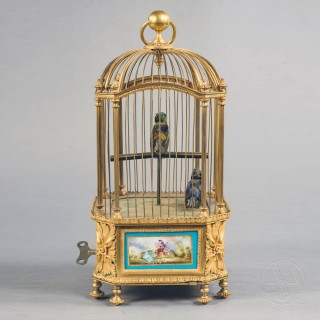 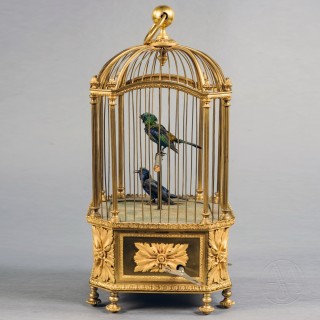 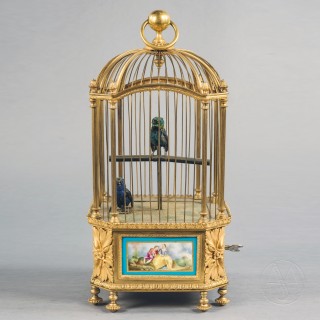 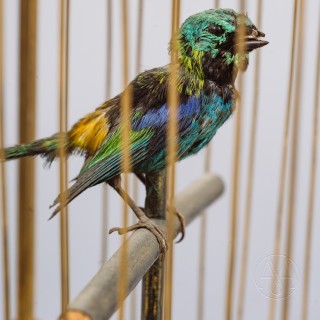 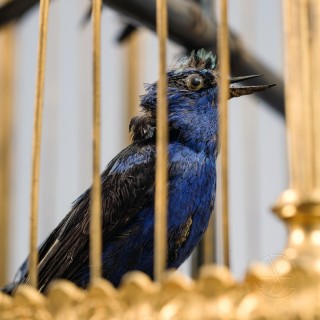 Stamped to the movement ‘Bontems, Paris’ and 266.

This rare double bird automaton is fitted with two exotic taxidermy birds with emerald-green and electric blue toned plumage, beneath a domed octagonal cage with slender fluted columns and a square section base with canted corners. The base is fitted with fine Sèvres style rectangular porcelain plaques, depicting scenes from the fête galante in the manner of Watteau. The cage has a hanging ring and a key winding mechanism which is housed in the base.

The upper bird is perched on a T-Bar to the centre of the cage, the lower bird standing to the front of the base. When wound with the key and the start/stop lever actuated, the birds begin to sing their chorus, the beaks, heads and tail feathers moving in a naturalistic fashion to the birdsong. As with the finest Bontems examples, the birds take it in turn to sing. The complicated mechanism has two cams, one for song, beaks and tailfeathers, the other for the heads; allowing the singing bird’s beak to move whilst both birds’ heads move continually from side to side.

Bontems’ range of superb gilt-bronze automaton cages decorated with Sèvres panels, represented the haute luxe end of the firm’s production. A cage of identical size, with canted corners and porcelain panels is illustrated as Model 525 (Cage à pans coupés) in the Bontems catalog of c. 1910, priced at 340 Francs in comparison to 126 Francs for a cage of the same dimensions on a giltwood base.

Blaise Bontems (1814- 1881) was enthralled by birds and their song from an early age and became one of the foremost makers of musical bird automata, famous for the realism of their song.

After an apprenticeship in Vosges, he set up on his own in 1849 in Paris, exhibiting at the Great Exhibition in London in 1851. He quickly became renowned for his singing bird automata, dioramas and birds in trees and arbors that produced realistic bird songs. His automatons were referred to by the jurors at the 1851 London Exhibition as “ingenious drawing room ornaments containing automaton birds … more for adults than children …” (Bailly, 44).

He went on to exhibit with success at many of the international exhibitions of the period. A reporter at the 1867 Paris Exposition Universelle described ‘the soul’ of the singing birds as a clock work mechanism, a pinned cylinder like a music box, a bellows system and whistle with a tiny piston to modulate the bird call. A further report from the 1878 exhibition notes that Bontems works not only displayed believable birdcalls, but that the wings, tails, and bodies moved in a realistic way.

After his death his son, Charles Jules took over the firm, exhibiting successfully at the Chicago World’s Fair of 1893 and the Paris Exposition Universelle in 1900. Jules was succeeded by his sons and the business remained in the family until 1966 when Lucien Bontems died, and the company was sold to the Swiss firm Reuge.