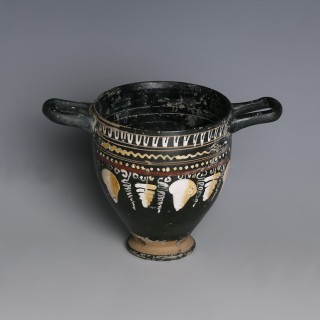 A fine Greek southern Italian skyphos from the region of Apulia, displaying typical features of Gnathian style. The vessel is decorated with the colours red, white and yellow over the top of a glossy, black background. The obverse side features a stylised vine pattern consisting of grapes, leaves and tendrils, with multiple bands of geometric and floral motifs above. The reverse displays a simple frame of two bands with circular motifs either side completing the design.

The Gnathian style originated from Apulia, a region of Italy located along the southern coast. It consisted of a polychromic design applied onto a dark, varnished background. The primary colours used were red, white and yellow although white soon became the dominant colour. The skyphos, a typical drinking cup in southern Italy, were used during drinking parties because of its practical shape. According to Plato, drinking parties were a common event which allowed guests to have discussions or articulate riddles. Along with listening to music and feasting, they would later sing many songs of skolia, several consisting of the pleasures of wine. The wine produced was aged in leather and clay containers, the alcohol content would be very high and therefore mixed with water to dilute the substance allowing for a better taste.

Circa 4th century BC

Good condition. Some surface wear to the gloss and a few light scratches.