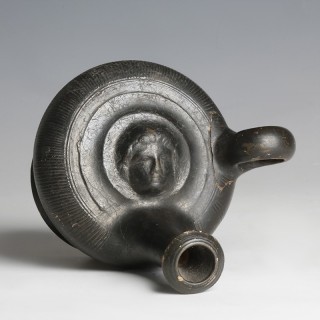 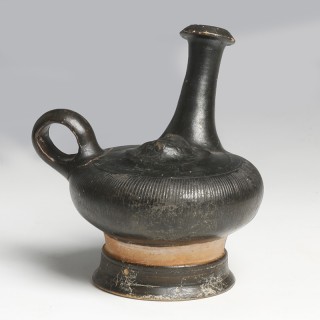 A Greek South Italian pottery guttus, covered entirely in black slip. Decoration is provided on the top with a facing head in relief, possibly meant to represent the god Apollo. Vertical ribs surround the profile and decorate the perimeter. The vessel has a high-angled spout and a ring handle around the top and the whole surface is black-glazed apart from a band around the foot which is reserved.

Gutti were vessels used by the Greeks to fill their oil lamps with oil. The long and narrow spout allowing easy and controlled pouring into the small filling holes lamps had.

The Greek god Apollo was considered the epitomy of masculinity and he was always depicted as a beardless, athletic and handsome youth. He is one of the most complex and important gods, making up part of the Greek Pantheon. He was a god with many attributes, including: music, poetry, art, oracles, archery, medicine, the sun, light and knowledge. As such, he was frequenly represented in Greek art and everyday life. As the god of light it is fitting that his image decorates this flask.

Condition: The handle has been repaired and there a couple of surface chips as well as rubs to glaze, otherwise complete and intact.