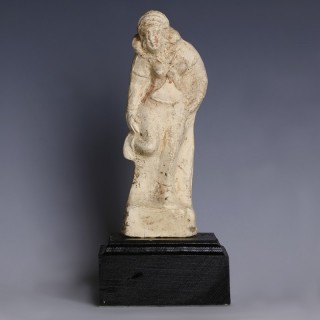 A stunning Greek Hellenistic hollow-moulded terracotta statuette of a nude female figure, portrayed slightly bending sideways to adjust her sandal, a common depiction of the goddess Aphrodite. A prominent pectoral ornament consisting of two ribbons intertwine across her breasts with a central disc present at the connection. Further accessories can be seen on her body including armbands and bracelets. Her hair is tied back with her facial and anatomical features rendered in a naturalistic manner. The statuette sits upon a black custom-made stand. Many replicas were made in Antiquity of the goddess in this classical stance, portraying the sensitivity of the female body. The statuette features traces of the original bright pigmentation.

In Ancient Greek religion and mythology, Aphrodite was the goddess of love, beauty, pleasure and procreation. Known as one of the most beautiful goddesses, she was unwillingly married to Hephaestus, a god of lesser beauty. This position led her to have had many secret affairs including with Ares explained in Homer’s Odyssey were they ‘made love secretly in her husbands Hephaestus’ palace’ (Book 8.265-270). Aphrodite played many key roles throughout Greek culture for example being a catalyst to the beginning of the Trojan war. This motif of Aphrodite adjusting her sandal was a popular depiction of the goddess during the Hellenistic period and was still frequently used during the Roman Empire. This particular stance could be seen across a variety of different medias such as on coins, vases and stones along with statues much like this beautiful example.

Condition: Very fine condition, some encrustation to the surface, accompanied with a custom-made stand.