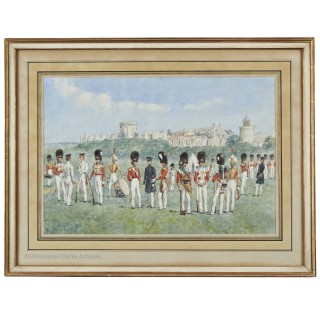 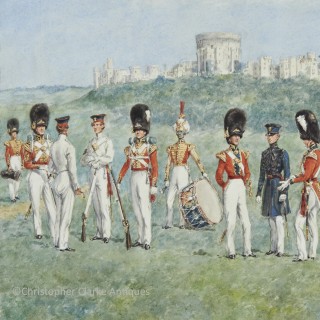 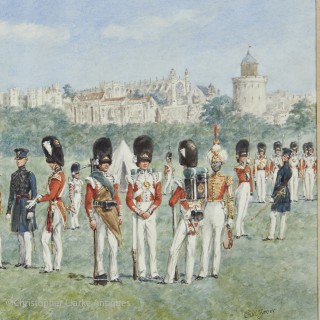 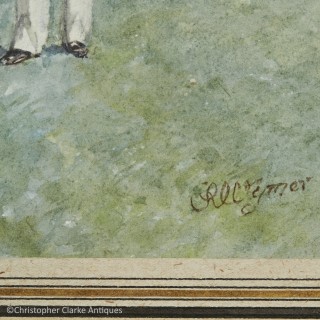 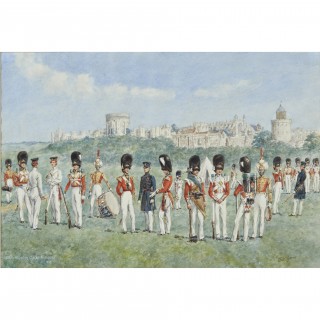 Grenadier Guards in Windsor Park by R. A. Wymer

A large watercolour on paper of soldiers of the Grenadier Guards in Windsor Park, with the castle in the background, by Reginald Augustus Wymer.

Wymer specialised in painting military subjects which is perhaps no surprise as he joined the 34th The Cumberland Regiment by purchase as a 19 year old ensign in August 1867. He stayed with the 34th until joining the Inverness-shire & Highland Light Infantry Regiment of Militia, becoming a Lieutenant on the 19th of January 1871. It’s possible this move to the militia is down to meeting his future wife, Mary Louisa Elwon, whom he married in Kilmodan, Argyll, Scotland in October 1872. It could also be that his artistic career was starting to take off. He is then listed in the 91st Argyllshire Highlanders Regiment of Foot. By 1881, the Wymers were in London, living at Cadogan Mansions, Chelsea and the family had grown to include 2 daughters and a son. Reginald became a Captain in the Queen’s Own Cameron Highlanders militia, (formerly the Highland Light Infantry) on the 12th June 1896. He stayed with the Camerons for another 10 years, retiring as a Major in 1905.

He was a successful artist and counted Queen Victoria, the Prince of Wales and Queen Mary amongst his customers, with several of his paintings still in the Royal Collection. He was accurate in the research of uniforms and detailed in his work.

This painting shows the different uniforms of the Grenadier Guards in around 1829. They are in Windsor Park with the Castle in the background. Circa 1900.

Grenadier Guards in Windsor Park by R. A. Wymer