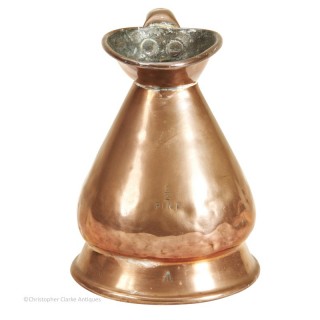 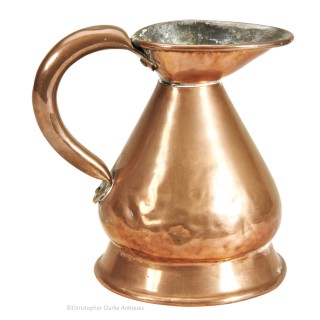 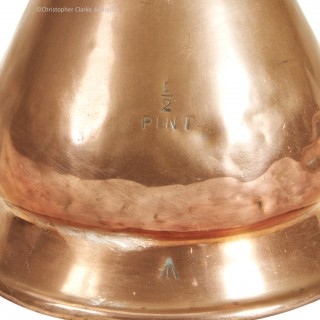 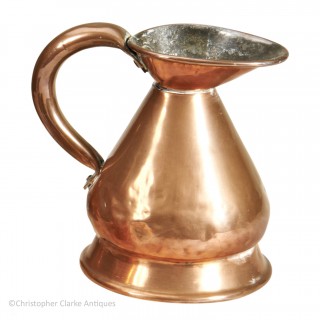 A copper Half Pint Lipped Rum Measure with tinned interior.

The jug measure is stamped with its volume to the front and has a Broad Arrow mark to is stepped base. There is a shadow mark to the inside of the lip where Custom’s verification marks on a lump of lead would have been. The underside of the base has been pushed out a little and this maybe the reason the verification marks being removed. Sometimes they are also knocked off when decommissioned.

The Lipped Measure’s handle is riveted to the body, as you would expect. The practice of stamping Lipped Measures with the broad arrow mark was stopped just before the start of the First World War. Circa 1910.

Rum and the Royal Navy
The tradition of issuing sailors with a daily ration of rum was born out of the propensity for their allowance of beer to spoil. This happened to Vice-Admiral William Penn’s fleet in 1655 in the West Indies and rum was used an alternative. As it doesn’t foul like beer would, it grew in popularity and became the established alcohol issued on board ship. In 1740 Vice-Admiral Vernon was worried about the effects of giving his crew half a pint of rum every day and ordered that it be diluted with a quart of water. The Admiral was known as Old Grogram after the waterproof grogram coat he wore and so the mix of rum and water was soon given the nickname Grog. Over the years the proportion of rum to water changed with the Grog becoming weaker each time. What didn’t change though was the need for accuracy in measuring and issuing the rum, giving rise to the equipment need to do this.

The Royal Navy blended its own rum in its Victualling Yards at Deptford, Gosport and Plymouth and from there the casks or wicker covered jars were then sent out to the fleet. On board ship, the rum would be stored in the Spirits Room. Under the watchful eye of the Supply Officer, the rum would then be pumped out of a cask or poured from a jar into a Lipped Measure jug which was considered more accurate than a Round Measure. It would then be poured into a Barricoe or Breaker barrel using a funnel and carried onto deck to be mixed, in plain view and in front of a Witnessing Officer, with water in a Grog barrel. Round measures would then be used to allocate each mess’s allowance, dependent on their number, to their Rum Bosun. It was poured into his Fannie tin which the Bosun would then take back to his mess to distribute.

The practise of giving sailors a daily ration of rum was finally stopped on the 31st of July 1970 or Black Tot Day as it became known. It was considered that rum and highly sophisticated military equipment was not a good mix

Good, some dents as to be expected.