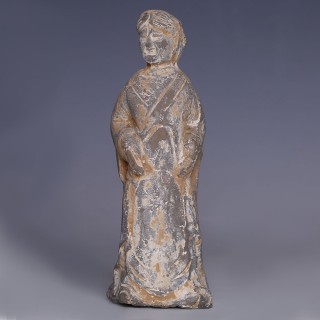 A very fine hollow-moulded grey earthenware female court attendant from the Chinese Han Dynasty period. The figure is presented standing in a reverent pose, wearing the traditional Han Dynasty court attire, known as shenyi, consisting of a long vest, tied to the waist and long, flaring sleeves. Her hairstyle, with a parting line in the middle and a bun to the back, is highly detailed through incisions. She has a calm expression, with gently smiling lips. This type of figurine would have been mould-made, with detailing added later.

The C. Roger Moss OBE collection. The late C. Roger Moss OBE was a renowned art collector who, throughout the years, thanks to his determination and enthusiasm, was able to create an outstanding collection of artworks, most prominently from China and the Orient, but also from other cultures.

Very fine, some earthly encrustations on the surface. A very detailed example.