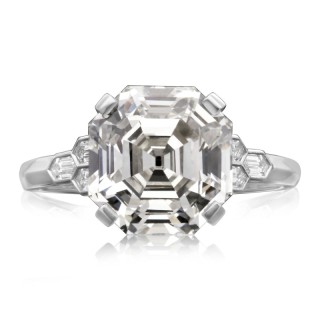 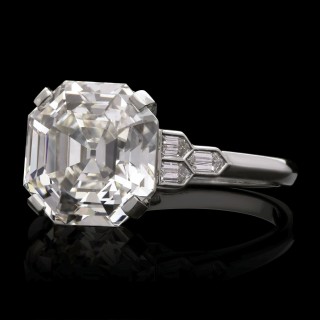 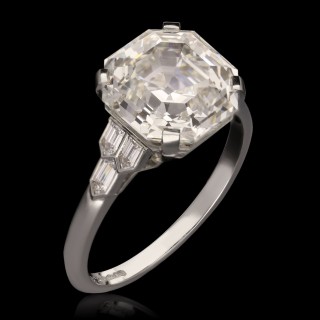 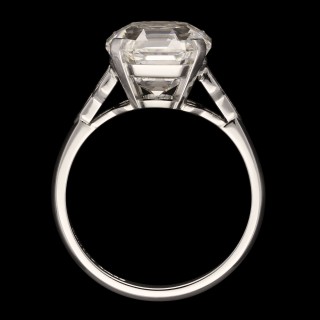 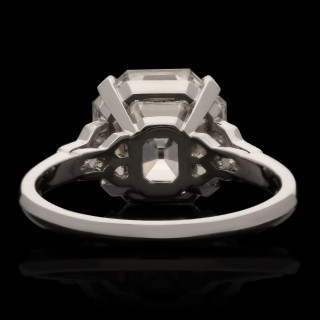 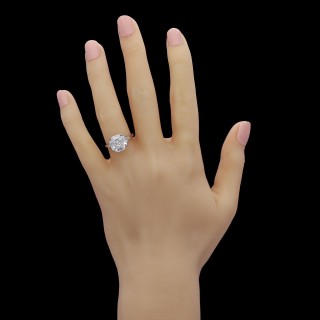 An elegant step cut diamond ring by Hancocks, set to the centre with a beautiful old cut Asscher diamond weighing 5.14cts and of H colour and VS2 clarity in corner claws to a simple double bar gallery between shoulders set each side with three bullet cut diamonds forming a stylised honeycomb pattern, all in a finely hand-crafted platinum mount with knife edge band.
Maker
Hancocks
Period
Contemporary
Origin
London
Gemstones
5.14ct H VS2 old cut Asscher diamond with GIA certificate
6 x bullet cut diamonds weighing 0.23cts in total
Setting
Platinum with maker’s mark and London assay marks
Weight
4.6 grams
Dimensions
UK finger size M 1/2, US size 6.5
Can be made any size
Condition
New
Directors Notes
The Asscher cut was designed by Joseph Asscher in 1902 in an attempt to best utilise the natural shape of octahedral diamond crystals. The cut is essentially a square shape with the corners cut off quite steeply creating an almost octagonal outline to the stone. The facets are carefully arranged in three rows of straight, step-like faces to the top and bottom of the stone which has a wonderfully elegant and clean appearance with a more subtle sparkle than cuts such as the round brilliant. It became increasingly popular during the early 20th Century, particularly in the Art Deco period when the straight edges and angles of the cut suited the aesthetic perfectly. The Asscher family have been diamond dealers since the mid 19th Century and are probably best known as the company entrusted with the cleaving and cutting of the world famous Cullinan diamond.