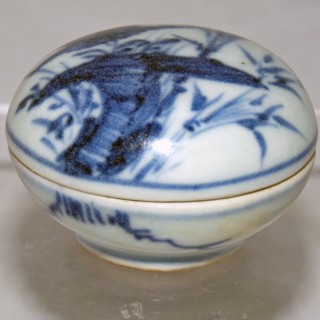 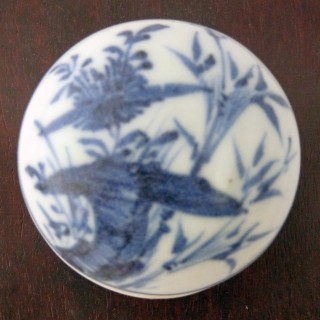 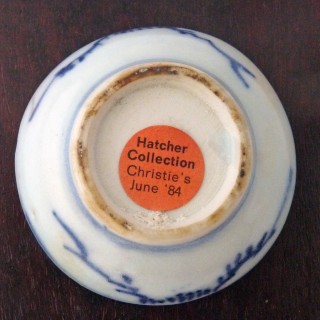 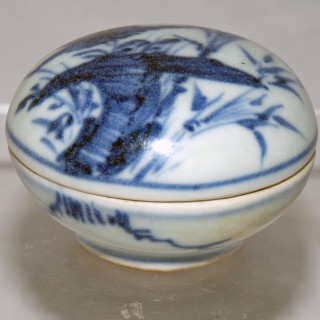 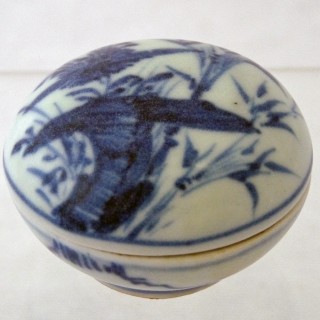 Ming / Early Transitional small compressed form blue and white lidded box and cover. Painted to the top with grasses, rock work and sunflowers. with grasses to the side.
Known as Hatcher cargo as it is from a sunken Cargo vessel that was salvaged by Captain Michael Hatcher and the cargo was subsequently sold through Christies Amsterdam. This was the first of the Cargos that were brought to auction and was named after the salvager – Michael Hatcher. Other cargos include the Nanking Cargo, the Ca Mau and the Vung Tau cargo. the small piece was probably for pigments, dressing tables or spices
It was sold in two auctions in 1984 and 1985 and remains on of the most significant of the cargos as it enabled more precise dating of other late Ming wares at other sites.
The ship foundered in 1643 and although it is just in the Ming Dynasty it remains important.

Overall very good. As expected there is a little degrading of the glaze which is expected on such pieces and a very small rim chip to the inside which is visible on the photos of the inside