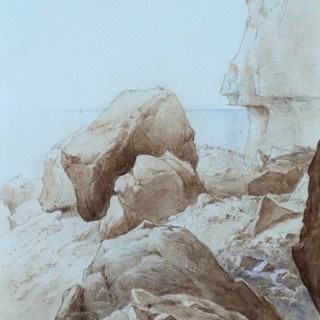 Holiday was born in London and initially took lessons with William Cave Thomas. He then studied at Leigh’s Academy and the Royal Academy Schools. Through his friendship with Albert Moore and Simeon Solomon he was introduced to Rossetti, Morris and Burn-Jones and thereafter became associated with the Pre-Raphaelite school. As a painter is possibly best known for his Dante and Beatrice exhibited at the Grosvenor Gallery in 1883 and now in the Walker Art Gallery but he was also a talented stained glass designer, illustrator, sculptor and enamellist. In 1890 he founded in Hampstead his own glassworks, which produced stained glass, mosaics, enamels and ecclesiastical objects.