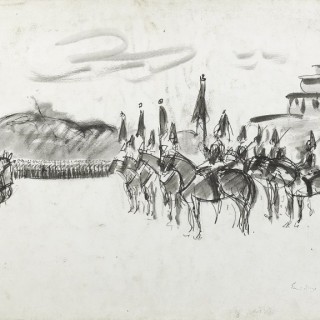 Ink and wash on paper

As a highly decorated soldier in the Great War, Maze new the military arena intimately. In the Second War he commanded a battalion of the Home Guard interrupted by a spell on the continent on a yearlong special mission for Sir Arthur ‘Bomber’ Harris at SHAEF. He enjoyed the visual feast that a splendid martial and state occasion afforded an artist. His many contacts in the military establishment, including Sir Winston Churchill, who he’d first encountered in the trenches, allowed him privileged access to the annual Trooping the Colour ceremonies and he was often to be seen, a lone figure at an easel at Horse Guards or Windsor Great Park recording each event for posterity. Indeed for major state occasions, coronations and the like, the army erected a special wooden stand granting a unique perspective above the throng. Wildenstein’s held a show of his work depicting military pageantry in 1973 entitled ‘Paul Maze and the Guards’. After his death a memorial service at the Royal Hospital, Chelsea was organised for him by his friend General Sir Michael Gow.