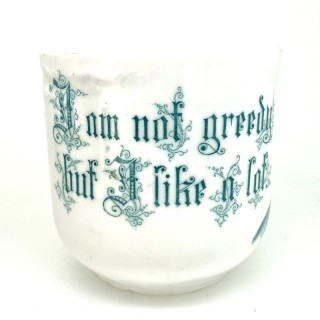 A china mug featuring a monochrome image of William Howard Taft. Next to his image is his famous slogan I Am Not Greedy But I Like A Lot. marked Three Crown China Germany on the underside of the baseWilliam Howard Taft (September 15, 1857 – March 8, 1930) was the 27th president of the United States (1909–1913) and the tenth chief justice of the United States (1921–1930), the only person to have held both offices. Taft was elected president in 1908, the chosen successor of Theodore Roosevelt,