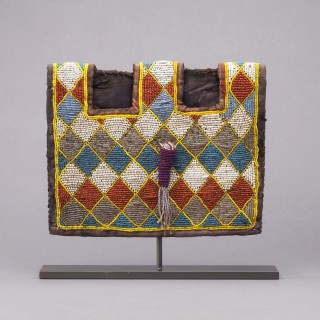 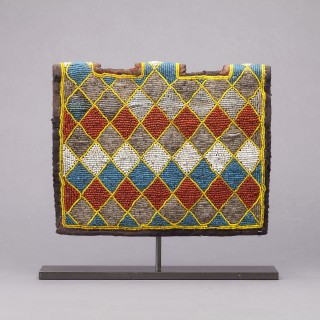 A beautifully worked beaded coat made for an Ibeji figure.

Twin births among the Yoruba speaking tribes is considerably higher than the average and these children held a special position within the family and were believed to have the ability to confer good or ill fortune on the members. As such, and because they were necessarily smaller than single births, they were fed on high calorie and expensive palm oil and beans after the breast feeding period.
Because it is believed that in multiple births the babies share a soul, if a twin should fail to survive a diviner would be consulted to prescribe appropriate sacrifices and to say whether an ibeji should be made and by whom; he may also specify that one be made of the surviving twin. These cherished little sculptures would, on occasion, also be dressed, usually in a simple cloth robe as with those in th1161e ethnographic collections of the Fitzwilliam Museum in Cambridge. Very occasionally they would be clothed in a decorative beaded jacket such as this.