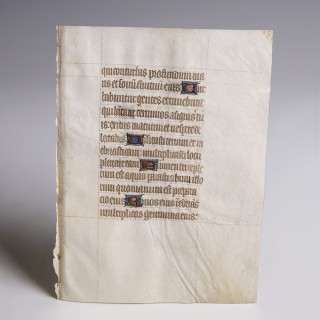 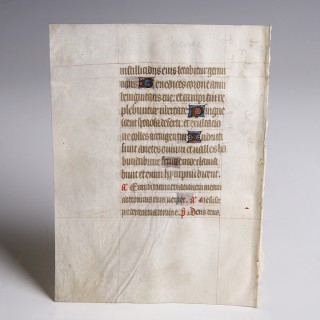 A beautifully decorative single leaf from a psalter book. On each side of the page are 12 lines of text written in brown and red ink in a script known as lettre-batarde. The initials throughout are drawn in red and blue with gold infills. A large empty border surrounds the small box of text, which can be read as Psalm 64: 8-14. It begins on the page ‘qui conturbas profundum maris, sonom fluctuum ejus’ (He will turn their own tongues against them and bring them to ruin), and was the psalm thought to have inspired the creation of the Sacred Heart.

A psalter is a volume containing the Book of Psalms, often with other devotional material bound in as well, such as a liturgical calendar or a litany of the saints. Until the later medieval emergence of the book of hours, psalters were the books most widely owned by wealthy lay persons and were commonly for learning to read.