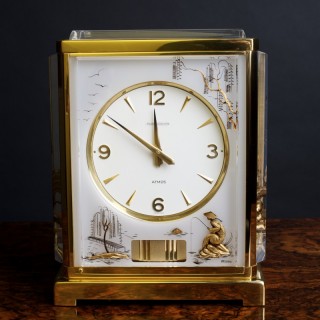 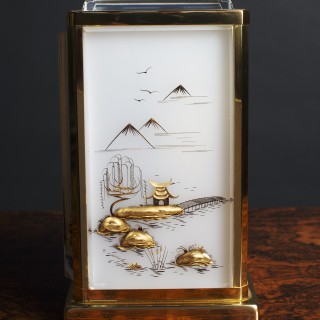 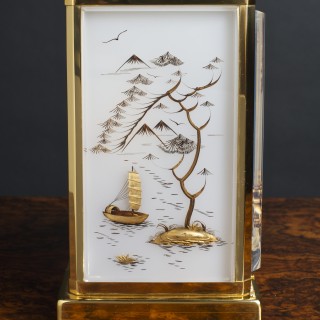 The first Atmos clock was designed by a young Parisian engineer called Jean-Leon Reutter in the late 1920’s, he struggled to get his ideas for a perpetual motion clock into production, but after a chance meeting with the manager of the famous Swiss watchmaking firm ‘Le Coultre’ who was so impressed with his clock that he immediately bought himself one. Later Jean-Leon Reutter sold his design to Le Coultre who shortly after merged with the famous Parisian watch making firm ‘Ed Jaeger’, to become the now world renowned watch making company ‘Jaeger-Le Coultre’.

Jaeger & Le Coultre poured considerable investment and collective research and development into Reuters Atmos clock. One of the main changes being that the bellows that originally contained mercury were mow filled with a special more stable saturated gas known as ‘Ethyl Chloride’. The technological concept of the gas filled Atmos bellows is a remarkable one: Inside a sealed capsule, a mixture of gas and liquid expands as the temperature rises and contracts as it falls. Moving the capsule back and forth. This motion is used to constantly wind the mainspring thus enabling the clock to keep constant time. A small temperature variation of just one degree or even a very slight change in atmospheric pressure is sufficient to power the clock for just over two days. Such variation occurs naturally in normal room temperature and thus without any additional sources of energy, the Atmos clock will continue to run if left untouched, ‘forever’.

Atmos clocks are still in production to this day with the standard model costing £3,800 and rising to £7,500 for the most unusual design. In 2003 to celebrate Atmos’s 75th anniversary a complicated and very special Atmos clock was developed called the ‘Atmos Mysteriuse’ which sells for Euro 1.5 million!