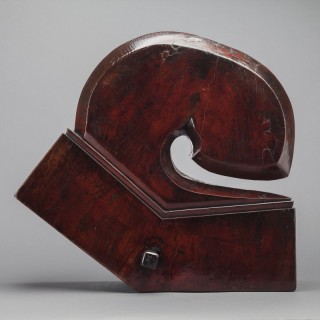 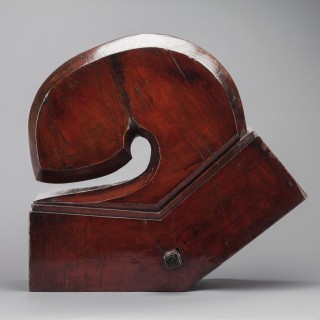 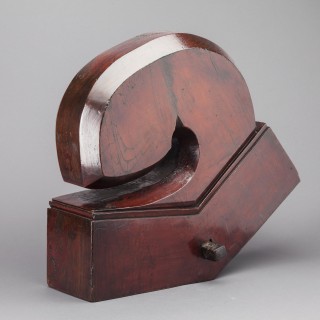 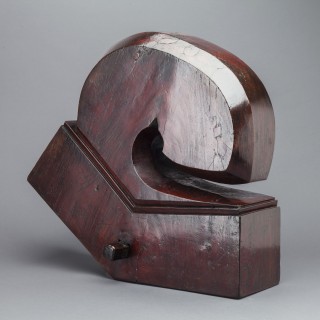 The jizaigaki is the hook from which is suspended the kettle for making tea and it is found in the heart of the home above the irori or sunken hearth where the family gathers and guests are welcomed.

Because of this focus much pride is taken in the beauty of the jizaigaki and those of carved wood take one of two forms. The simpler J shaped hook is known as Ebisu and this more refined shape is called Daikoku. They take their names from the Seven Gods of Luck who are also favoured house gods. The Daikoku jizaigaki is so called because it resembles the hat of the god who bears this name; he is a god of wealth who is depicted in paintings, okimono and netsuke carrying a bag of precious things slung over his shoulder, carrying a mallet which grants wishes and standing on two bags of rice – a god to bring prosperity to the home. Daikoku is such an important god that he was depicted on the first Japanese bank note.

Jizaigaki are known to have been in rural use during the Muromachi period, 14th to 15th century, and it is thought that they were introduced into tea houses by a master of the tea ceremony, Takeno Jouou (1502-55) who introduced an artistic sensitivity in the utensils used for the ceremony. Over time this aesthetic was adopted by society and this art form incorporated into wealthy homes.
Provenance: Private European Collection