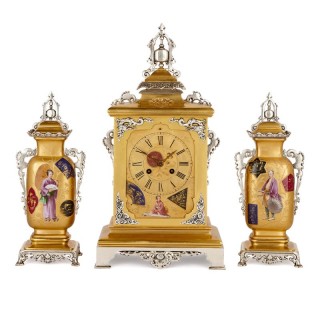 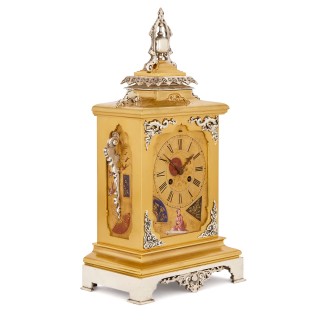 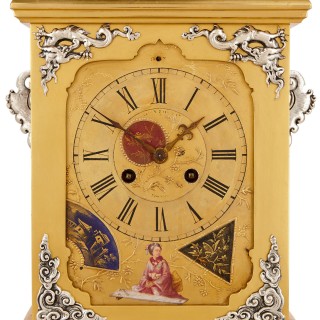 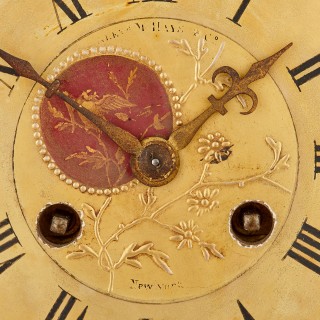 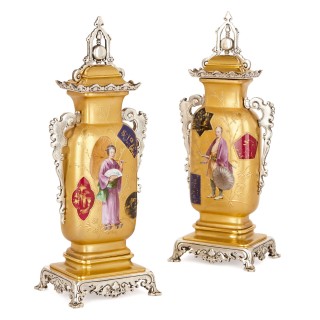 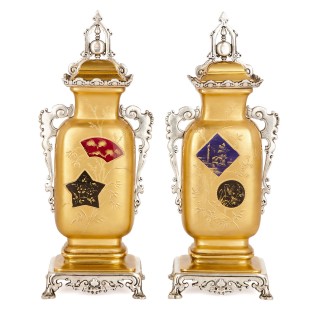 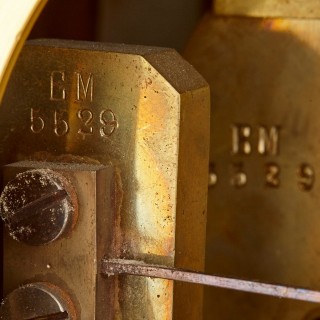 This Japanese style clock set was crafted in France in c.1880. The set consists of a central clock, which is accompanied by two vases.

The central clock features a gilt brass rectangular body with a pitched top, like a pavilion roof. The roof is mounted with wavy, silvered brass forms, and topped by a silvered brass ball finial, with a pointed end, which is bracketed by wavy forms.

Mounted onto the four corners of the clock’s front facade are silvered dragons and cloud-like motifs. The central panel is recessed, and contains the gilt brass circular clock dial, inscribed with Roman Numerals. The centre of the clock dial is decorated with embossed flowers and a circular, red form, with a painting of a bird at its centre. The dial is signed with the retailer’s name, ‘ALEX’R M HAYS, NEW YORK’. The space below the dial is ornamented with relief flowers, a black porcelain triangle, which is overlaid with floral designs, and a dark blue porcelain fan, decorated with buildings. They are accompanied by the porcelain figure of a Japanese woman, wearing a kimono and seated at a koto.

Similar recessed panels, featuring porcelain birds and coloured geometric forms, decorate the sides of the clock body. These are mounted with wavy, silvered brass shapes, which serve as handles. The clock body is set on a rectangular, silvered brass base, which is raised up on four bracket feet, and features a cloud-like silvered brass apron.

The vases that accompany the clock have tall, soft-edged rectangular bodies, and are decorated in a similar style to the central clock. They likewise feature silvered brass finials, handles and bases, and gilt brass bodies, which are decorated with embossed flowers, geometric painted porcelain shapes, and Japanese figures. Unlike the clock, however, the vases feature full-length portraits of standing Japanese figures. One vase depicts a woman, who wears a kimono and raised wooden shoes (geta), and who holds a parasol and fan. On the other vase, the image shows a man dressed in a haroi jacket, with a kosode and trousers underneath, and sandals on his feet. He holds a knife and circular, metal shield, and carries a katana sword under his arm. The backs of the vases are ornamented with relief plants and flowers, and decorated with red, dark blue and black porcelain shapes.

This clock set is an exquisite and highly intricate piece of craftsmanship. It will add colour and elegance to an interior, either antique or contemporary in style.