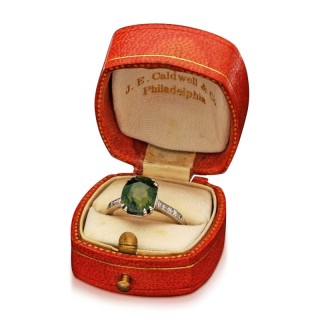 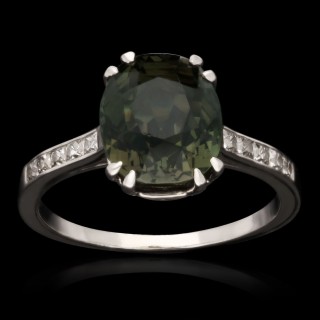 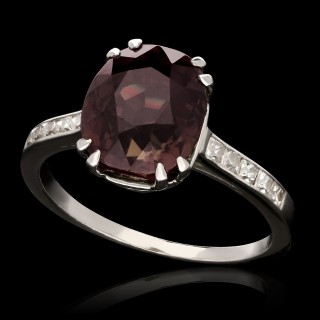 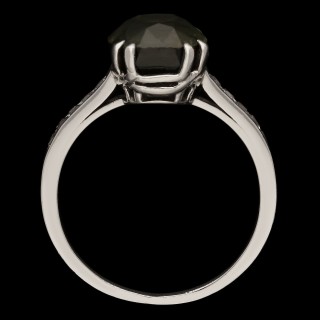 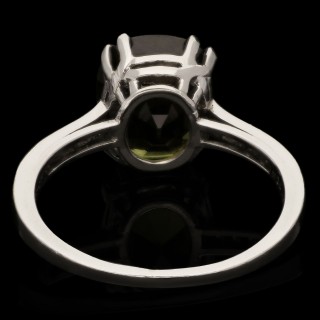 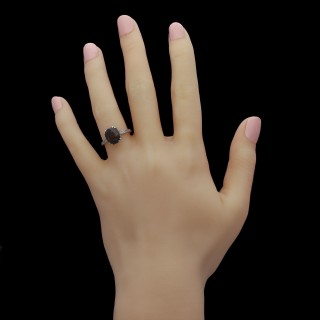 A superb Art Deco alexandrite and diamond ring by J.E. Caldwell & Co. circa 1930, set with a cushion shaped Ceylon alexandrite weighing 5.40ct, certified untreated and with ‘strong’ colour change, claw set between tapering shoulders channel set with graduated square French-cut diamonds, all in a platinum mount with D-shape band. This lovely ring comes with its original leather box with gold tooling. It is rare to find alexandrite gems of good size, clarity and colour change so this ring is a special piece. To read more about this extraordinary gem and how it changes colour please see our director’s notes below and you can read more information on J.E. Caldwell & Co. in our maker’s biographies.
Maker
J.E. Caldwell & Co.
Period
Art Deco, circa 1930
Origin
American
Gemstones
5.40ct Cushion Shape Alexandrite from Ceylon with AGL certificate stating the stone is untreated and has a ‘strong’ colour change of 80-90%.
10 x calibre square diamonds
Setting
Platinum signed J E C & Co and numbered
Weight
4.3 grams
Dimensions
UK finger size M, US size 6.25
Condition
Very fine
Directors Notes
Alexandrite is a member of the Chrysoberyl family of gemstones and is known for its fascinating colour change effect from raspberry red to deep green. It was first discovered in 1834 by the mineralogist Nordenskiöld in the Ural Mountains of Russia when it was initially mistaken for emerald as it had been found very close to an emerald mine. However further detailed examination of the gemstone, and the discovery by candlelight of its extraordinary ability to change colour, resulted in it being declared a new and exciting variety of gem altogether.
It is said that the first Alexandrite was discovered on the very day that the young heir to the Russian throne, Tsar Alexander II, turned 16 and came of age. It was therefore only fitting that this new gemstone be named in his honour. Not only was Alexandrite discovered on this auspicious day, but the colours of the gemstone mirrored the colours of Imperial Russia and it wasn’t long before it was heralded as the official gemstone of the Tsars.
Further discoveries of Alexandrite were made soon after in Ceylon (now Sri Lanka) and for many years these two places were the only known sources of this exceptional gemstone. It is very rare to find stones in large sizes and when this is coupled with good clarity and a strong and attractive colour change, the stone must be considered incredibly rare and valuable.
The colour change effect is caused by the very specific way Alexandrite absorbs light from the visible light spectrum. When viewed in daylight, which is rich in green-blue light, the stone will appear green however when the light is changed to candlelight, which is much richer in light waves from the red end of the spectrum, it will appear red. So the stone can be thought of as ‘sitting on the fence’ when it comes to making a decision about what colour it wants to be and it will ‘tip over’ on to one or other side depending entirely on the light shining on it.
Today Alexandrite is recognised as one of the birthstones for June as well as being the gemstone that symbolises and celebrates the 55th wedding anniversary.