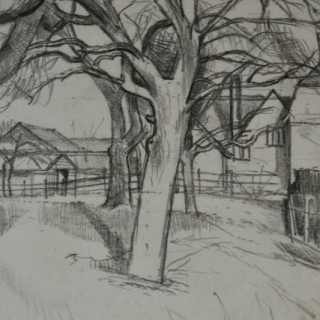 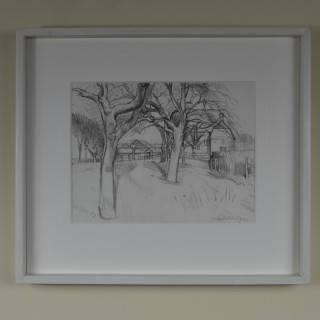 John Arthur Malcolm Aldridge was born in Woolwich and educated at Uppingham and Corpus Christi, Oxford where he became a close friend of John Betjeman. Although he received no formal art training, but having painted from his early years, his innate talent was quickly evident, and by 1931 he had been invited by Ben Nicholson to exhibit with the pioneering Seven & Five Society. He held his first one-man exhibition at the Leicester Galleries in 1933 and exhibited at the Venice Biennale in 1934.

At this time he settled in Great Bardfield, Essex, a village that was to be home to an artistic community that included his great friend Edward Bawden as well as John Nash, Kenneth Rountree, Michael Rothenstein, Cedric Morris and others. At Great Bardfield he took pleasure in painting the Essex countryside and above all the garden and grounds he was developing at his home, Place House.

Aldridge served in the army during World War II, 1941-45. In 1949 he was invited by William Coldstream to become a painting tutor at the Slade where he remained until 1970. An excellent portrait painter, his portrait of his close friend Robert Graves is in the collection of the National Portrait Gallery. The Tate Gallery, Victoria & Albert Museum and many other public collections hold examples of his work.