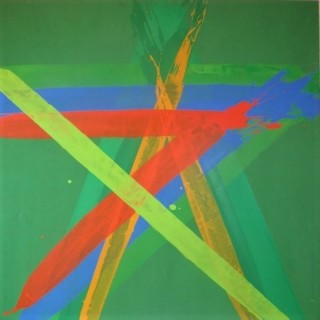 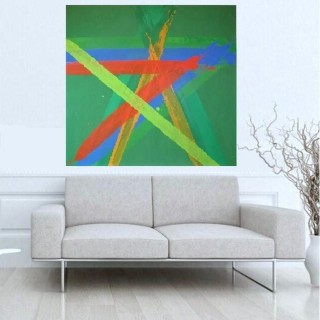 Acrylic on canvas, signed titled and dated on reverse.

To quote the artist, ‘ Painting is colour and colour is painting’, so describes the colourfield works painted in the second half of his career, influenced by the American abstractionists of the 50’s and 60’s.

Copnall was born at Slinfield, Sussex, into an artistic household. His father was the eminent sculptor Edward Bainbridge Copnall,. After studying with his father at the Sir John Cass College, London, Copnall enrolled at the Royal Academy Schools, then under the architectural artist Sir Henry Rushbury. He enjoyed early acclaim and won the Turner gold medal for landscape painting. After his graduation in 1954, he went on a hitchhiking tour of Spain with a friend – and it changed his life. He fell so in love with the country, that a month-long holiday turned into a 14-year stay.

Copnall’s experience of Spain – the intensity of the light, the saturation of colour, as well as the immensity of the landscapes – all influenced his move from representational art to complete abstraction. Nicolas De Stael was an influence from this period, and Copnall’s stylised realism, employing the rich earthy colours he saw around him, was both successful and profitable.

In 1968 Copnall went back to England, fearing – probably wrongly – that he was missing out on the British art scene.

Although he maintained that his work remained landscaped-based, however tenuously, for the rest of his career it was dominated by dramatic colour field painting. The thick impasto oils and collages of the Spanish years were superseded by brilliant acrylics on cotton duck. These large, late works reflect his admiration for the abstract expressionists Hans Hofmann and Morris Louis.

Widely appreciated by many fellow artists, Copnall won the EA Abbey scholarship in 1970 and awards from the Arts Council and the British Council. In 1988 he was elected to the London Group. From 1973 to 1993 he taught painting part-time at the Central School of Art and Design and also at Canterbury College of Art.

Copnall’s first solo exhibition was at the Piccadilly Gallery in 1955, but this was followed by many more in Britain as well as in Germany (Cologne, Nuremburg, Stuttgart, Munich), Spain and Finland.

Galleries included the Bear Lane and Oxford galleries in Oxford, the Ikon in Birmingham, the De La Warr Pavilion in Bexhill-on-Sea, the Institute of Contemporary Arts, Austin/Desmond Fine Art and Reed’s Wharf Gallery in London.