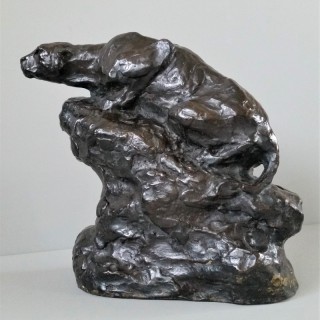 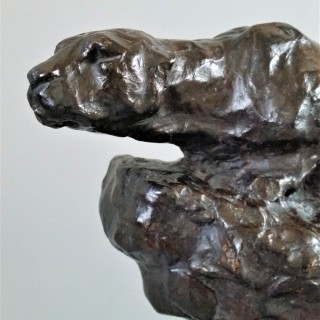 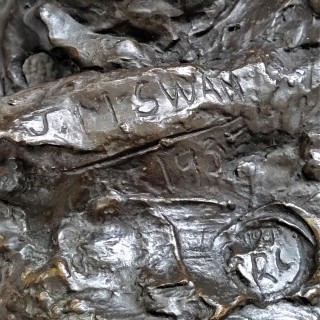 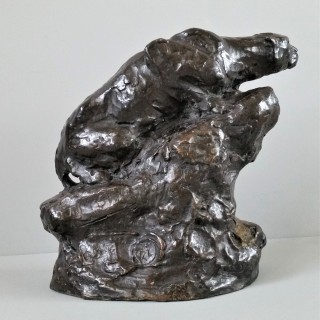 John Macallan Swan (1847-1910)
Crouching Panther
Bronze signed and dated 1905, lost wax cast.
Swan came from an artistic family. He trained his sister Alice Macallan Swan (1864-1939) in painting and another sister, Margaret, married the artist W.R. Symonds (Swan and he were fellow students at Lambeth School of Art). John Macallan married Mary Ann Rankin, who was an artist specialising in portraits of children who also made some sculpture. Their daughter Mary Ann became sculptor.
John Swan studied painting at Worcester School of Art, and around 1872, at Lambeth School of Art and later the Royal Academy Schools. Not satisfied with the teaching in London, he left for Paris where he entered the École des Beaux-Arts, in 1874 and studied under Jean-Léon Gérôme and Jules Bastien-Lepage. Swan had developed an interest in animal subjects so Gerome introduced him to the eminent animal sculptor Emmanuel Fremiet. Swan learned the art of animal anatomy from Fremiet and began a career in modelling animal sculptures. For the remainder of his life, he would divide his time equally between painting and sculpting. When he returned to London, Swan continued an earlier practice of drawing directly from animal subjects by working in Regent’s Park Zoo.
He regularly exhibited at the Royal Academy, became an associate in 1894, and a full academician in 1905. He is best known for his paintings and sculptures of lions, tigers, jaguars and polar bears that contemporaries praised for their naturalism.