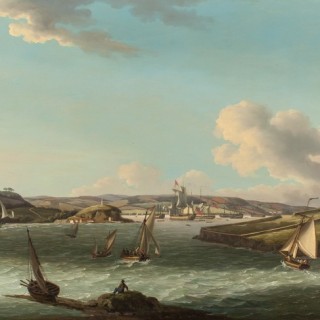 This wonderful vista of the entrance to Plymouth Sound serves as an important document of the bustling port in 1808. The vast natural harbour had long since been an important nucleus for the Royal Navy, owing to its proximity to the Atlantic Ocean and as the British Empire grew, so did the importance of Plymouth as a global commercial centre. In particular, the East India Company thrived in the sub-continent, bringing back valuable commodities such as sugar and tea from Asia via the Indian Ocean. Further, with the advance of the Industrial Revolution, Plymouth dockyard became a centre of excellence for the construction and repair of Royal Naval ships.

It is tempting to suggest the figure in the centre foreground is Serres observing the scene from the tip of Drake’s Island with Mount Edgcumbe park to the west (left) and the fortifications at Devil’s Point, built as part of Henry VIII’s coastal defences, to the east (right). The three-decker with a red pennant immediately in the distance indicates a Vice Admiral of the Red present with his squadron. Interestingly, in April 1808 there were six Vice-Admirals promoted to Admiral and it is not impossible this painting was commissioned to commemorate one such event.

Born on 12 December 1759 John Thomas Serres was the eldest son of Dominic Serres (1722-1793) and his wife Mary Caldecott. His childhood coincided with the years of his father’s ever-increasing success and recognition as an artist on a national scene. The Seven Years War (1756-1763) generated great public interest and an increasing demand for pictures of topical events which the already established marine painter Dominic Serres was well placed to meet. Many of these works were commissioned by senior naval commanders, such as Commodore Augustus Keppel, who formed part of Dominic’s growing network of friendships. Alongside these important patrons were the family’s artistic friends and connections. From 1765 the family lived in Golden Square, close to artists such as Samuel Scott, Charles Brooking, and Thomas and Paul Sandby brothers. Along with the Sandbys, Dominic was elected as a founder member of the Royal Academy in 1768.

Growing up in this atmosphere, it’s hardly surprising that John Thomas followed his father into an artistic career. Under Dominic’s tuition John Thomas learned the importance of preliminary drawings, as well as the techniques of engraving and oil painting. His skills as a draughtsman enabled his appointment as Drawing Master at the Maritime School at Chelsea in 1779, where he instructed naval cadets in the art of drawing marine subjects, in particular of coastal views from seaward. Although John Thomas left the school when it closed in 1787 his period as master was to have a great impact on his subsequent career and legacy.

In 1793 after his father’s death, John Thomas succeeded him to the position of Marine Painter to George III and the Duke of Clarence. Following this he was appointed Marine Draughtsman to the Admiralty in 1800. Ever since Piercy Brett, George Anson’s first lieutenant in the Centurion on the voyage round the world (1739-44), made drawings of the coastlines they passed, which were subsequently engraved, the Admiralty had been aware of the value of such views in identifying landfalls. The necessity of more hydrographic work to produce charts showing coast, islands, isolated rocks and other hazards had been thrown into sharp relief by the increasing hostilities with the French and the need for more accurate representations of the coastlines of France, Spain and the Mediterranean to aid the Admiralty and the Naval fleets. Serres was tasked to sail in a variety of naval ships around the coasts of Britain, France, Spain and the Mediterranean making drawings in the form of elevations, a selection of which were then published in The Little Sea Torch (1801). These graphic and atmospheric drawings are remarkable, not only because of their accuracy in representing the features of the coastline for navigational purposes but also because of the conditions in which Serres was working: on a rolling ship, with limited resources and considerable time pressure.

Serres later published Liber Nauticus (1805) which aimed to help students draw ships and combined plates after his own work and that of his father, illustrating different types of vessels. Alongside these successes as a draughtsman he continued to paint topographical views, sea battles and other maritime subjects and was a regular contributor to the Royal Academy. His unceasing desire to paint and find new outlets for his abilities was partially due to the profligacy of his wife, Olivia Wilmot, an extravagant woman with delusions of grandeur. She claimed to be the illegitimate daughter of the Duke of Cumberland, and styled herself ‘Princess Olive of Cumberland’. The marriage proved to be disastrous as her behaviour and debts ultimately ruined Serres, who died in a debtors’ prison in London on 28 December 1825.

Major George MacKean inherited Loughanmore House following the death of his older brother William Muir MacKean in 1944. The house had been in the possession of the MacKean family since 1920 having been acquired from the Adair family by their father Charles Luis MacKean.

Upon the death of George MacKean in 1983 Loughanmore House passed to his wife Patricia May, née Hely-Hutchinson, who presumably continued to live there until the house was demolished in 1988. 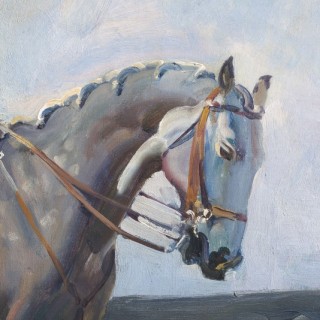