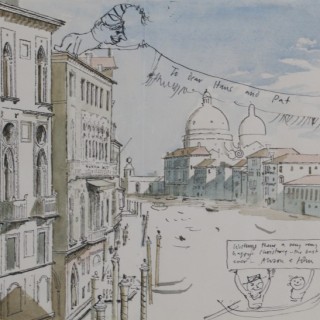 Ward was born in Hereford, where his father, Russell Stanton Ward, ran an antiques shop and restored paintings. He studied at the Hereford School of Arts and Crafts before winning a place to the Royal College of Art in 1936, where he studied under Gilbert Spencer, Charles Mahoney and Alan Sorrell and won the prize for drawing. During World War II he served in the Royal Engineers, using his drawing skills to design pillboxes, and later taking part in the D-Day landings. He was posted to Belgium after the war before returning to the Royal College to graduate in 1946.

Ward worked as a painter, illustrator and teacher, happy to work in oils, watercolour, pastel and pen and ink. He painted portraits, landscapes, interiors and architectural subjects, undertaking portraits of members of the royal family, businessmen and celebrities including the Princess of Wales, the Princess Royal and the christenings of Prince William and Prince Harry. Fifteen of his portraits are in the collection of the National Portrait Gallery and he held one man shows at Agnew’s and the Maas Gallery. As a prolific illustrator he worked on guides to Herefordshire and North Yorkshire and produced illustrations for Vogue magazine from 1948 to 1952 and illustrated many books including Laurie Lee’s Cider with Rosie (1959) and H E Bates’s The Darling Buds of May (1958). As a teacher he gave lessons in drawing to the Prince of Wales and taught at for a time at Wimbledon School of Art.