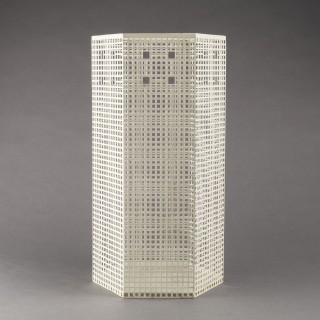 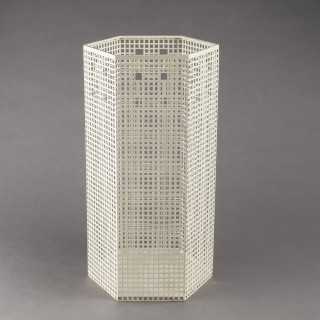 This crisply defined umbrella stand epitomizes the work of Josef Hoffman (his love of squares earned him the nickname Quadratl Hoffmann – square Hoffmann) in the early part of the 20th century and must have been a favourite as it is photographed in his studio at the Decorative Arts School in Vienna where he taught.

At the very beginning of the 20th century Vienna became one of the world’s most innovative art centres particularly in the decorative arts which underwent a transformation and Josef Hoffman was at the forefront of this revolution. In 1905 with the artist Koloman Moser (financed by banker Fritz Wärndorfer) he established the Wiener Werkstätte which was an alliance of artists, architects and master craftsmen in many fields; their focus was to design a complete environment from the building down to the door furniture improving all the household objects by applying sound design and utilising appropriate materials.This was realised in, amongst others, the Stoclet Palace, now a world heritage site, built for the banker and art lover Adolphe Stoclet in Brussels (1905-1911)

Throughout the early part of the 19th century Hoffman was a highly esteemed teacher at the Kunstgewerbeschule now the University of Applied Arts where he promoted talented students such as Egon Schiele whom he helped financially and Le Corbusier whom he employed. His clarity of design and contribution to the Modernist movement in Europe was acknowledged by important architect designers such as Le Courbusier, Alvar Aalto and Gio Ponti.

Awards:
Commander of the Légion d”Honneur
Honorary Fellowship of the American Institute of Architects

Yearning For Beauty, The Wiener Werkstätte and The Stoclet House. The exhibition catalogue, Centre for Fine Arts, Brussels Feb to May 2006 (in association with MAK Austria)
p.211 Flower Table 1904/05