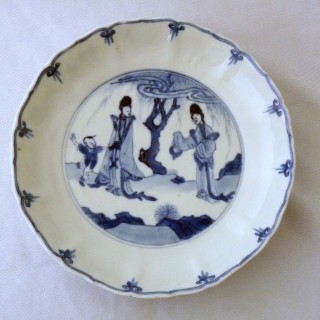 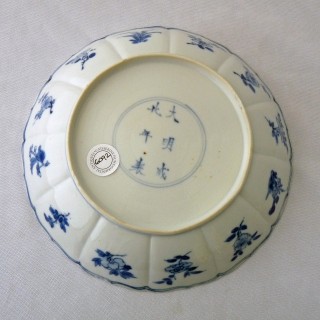 Kangxi Blue and white moulded plate made at Jngdezhen for export to Europe c1700.
The centre is painted with two standing ladies with a jumping boy all below a fringed willow tree with clouds.
The pattern could well be a reference to the story of Chang E The Goddess of the moon. She allegedly stole the elixir of immortality and had to flee to live on the moon. She is often depicted with clouds and at least one other lady
The sides are slightly moulded and painted with a double blue line which forms a ruyi head motif on the raised part of the side

The back is painted with a six character mark with in a double circle. This is an apocryphal mark to honour and not to deceive

The plate was made for export to Europe