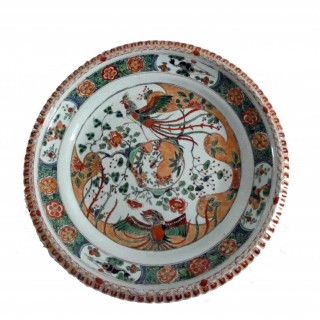 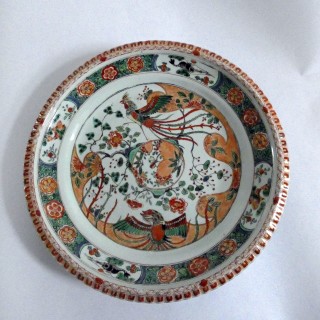 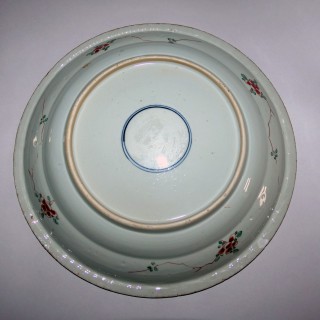 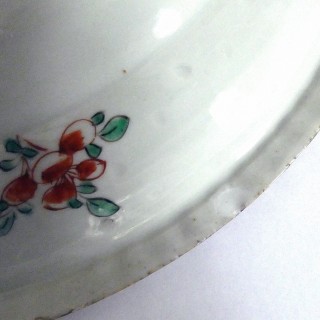 Chinese late 17th /early 18th century Famille Verte porcelain charger made at Jingdezhen during the reign of the Emperor Kangxi for export to Europe.
the deep charger has what is known as a pie crust rimwhich is painted in burnt orange colour and the centre is painted with an usual decoration for this type of plate.
The centre shows a pair of phoenix one in flight and the other with the wings outstretched. The outstretched winged phoenix is more common on ming porcelain and more of an important motif . The phoenix although associated with the Empress on export waren it is seen as representing fertility and the human qualities of virtue, duty, humanity and reliability. The birds are around a flowering tree that leads into a central cartouch of a pomegranite shaped ‘bubble’ in which are a pair of love birds above a burst pomegranite shedding it’s seeds. Both the birds and the pomegranite are seen as fertile harmonious marriage with a large family of boys.
The sides are painted with four cartouches of either fish or crustaceans in an intense border of flower heads and foliage.
The back is painted with sprays of peonies and to the base a double circle.
These plates are showing the transition from wucai decoration to the more refines famille verte of later wares.
An unusual and excellent example

Very good Small glaze chip to the underside of the rim