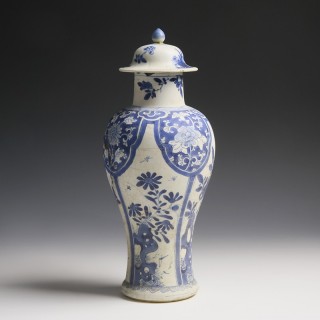 A blue and white glazed ceramic meiping vase with a bell-shaped lid and knop handle, panels of floral ornament and chrysanthemum borders.
Meiping (literally ‘plum vase’) stands for this type shape which was characteristically used to display plum branches with blossoms.

The samples recovered from the shipwrecked cargo are exclusively Chinese ceramics, in the main blue and white porcelain, all assessed by experts to be excellent examples of early Chinese Kangxi in origin of a quality indicating they were manufactured in the famous porcelain centre of Jingdezhen in the Jiangsu Province. Jingdezhen kilns made porcelain over two millennia, since the Han Dynasty period. Blue and white porcelain was the most famous product of Jingdezhen, and reached the height of its technical excellence in the early Ching Dynasty. The very high quality cobalt blue colouring, distinctive on the early Kangxi period fine porcelains where it is referred to as ‘gem blue’ or ‘kingfisher blue’, is much purer and brighter than that of Ming Dynasty wares.

Very fine condition; top of neck chipped around rim on one side; light dulling of glazed surfaces due to seawater exposure.