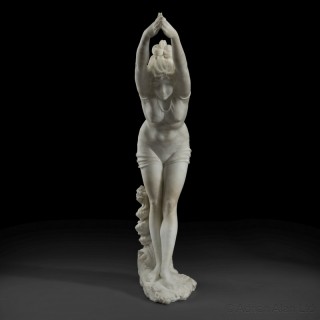 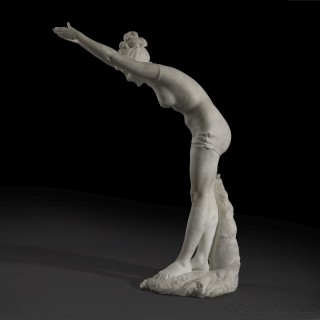 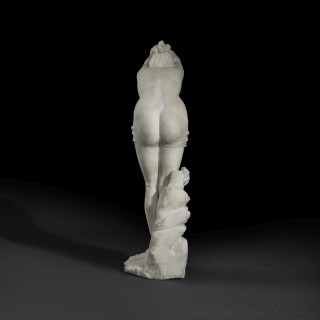 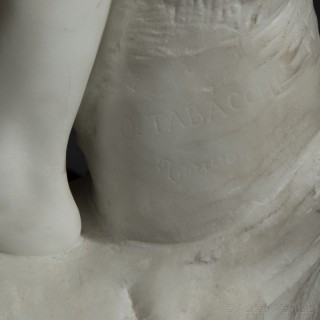 ‘La Tuffolina’ – An Important White Marble Group of A Diving Girl On A Naturalistic Base, by Odoarda Tabacchi.

This fine marble group depicts a graceful young girl wearing a knitted bathing dress, her hair held in a chignon with her arms raised above her head in a diving position, standing on the edge of a natural pool, with the waves lapping behind her.

This charming and dynamic figure, full of natural grace proved to be one of Tabacchi’s most popular sculptures and was edited in a number of sizes in both bronze and marble.

First exhibited in marble at the Esposizione d’arte di Napoli del 1877, it was reportedly purchased by King Vittorio Emanuele II and illustrated in L’Illustrazione Italiana, No 23, June 10, 1877, in an engraving based on a sketch by Michetti.

It was subsequently exhibited with great acclaim at the 1878 Paris Exposition Universelle and examples were also produced in ceramic, including Parian ware examples by the English firm of Robinson & Leadbenton.

A comparative marble version is in the collection of the Museo di Capodimonte, Naples.

Tabacchi studied at the Brera Academy in Milan from 1845 and then continued his studies in Rome, Florence and Naples. Settled in his own studio in Milan from 1860-1868 he created monumental sculptures accepting several important public commissions. Among his most important works form this period are the monument to Cavour in Milan (with Antonio Tantardini), the monument to Arnaldo da Brescia and the Cuzzetti and Sedaboni tombs in the Vantiniano cemetery in Brescia, Paleocapa, Garibaldi in Turin, Foscolo and equestrian monument to Umberto I, in Asti in Piazza Cairoli.

In 1867 he succeeded Vincenzo Vela to the chair of sculpture at the Albertina Academy and focused on smaller figurative sculpture, especially naturalistic genre scenes which earned him great popularity. He exhibited widely in Italy and in Paris and Vienna.