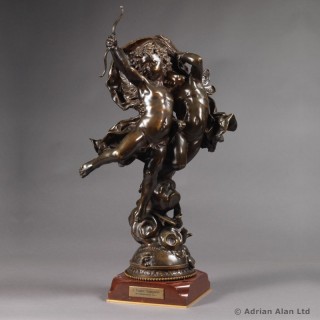 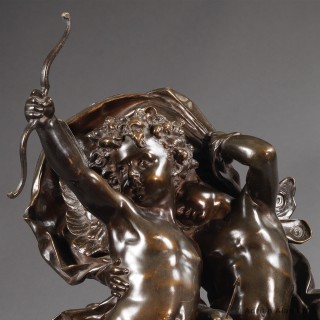 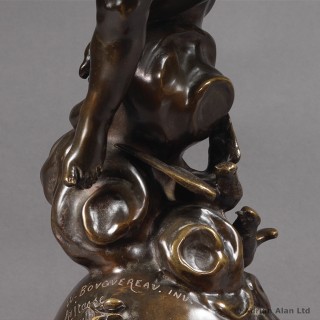 Signed ‘A. Itasse’ and dated 1887, further inscribed ‘W.BOUGUEREAU INV’ and stamped 43857.
The marble base with a plaque inscribed ‘L’Amour Vainqueur W. Bouguereau INVT’.

The inspiration for this fine bronze group was the painting of the same title by the celebrated artist William-Adolphe Bouguereau, painted in 1886.

Adolphe Itasse was an important French sculptor born in Loumarin in 1830, who died in Paris in 1893. He studied under Belloc and Jacquot and exhibited at the Salon from 1864 to 1893.

He specialised in portrait busts and reliefs including those of contemporary personalities. He also sculpted a number of genre and allegorical works, such as The Kiss, The Birth of Love, Astronomy and Science.

Amongst other awards he won a medal at the 1875 Salon and an honorable mention at the Universal Exhibition of 1889.