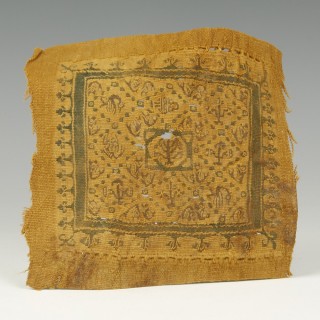 A finely embellished Coptic dark brown and coarse linen squared panel. This fragment displays a phytomorphic decoration all over the embroidered surface. To the centre of the panel the depiction of a tree, inserted in a small squared frame, is surrounded by geometrical and floral motives. A beautiful floral decoration with lilies frames the entire composition. This decorative strip could have easily been part of a tunic as a decoration.

Such floral decorations were a common motif in the Near East and are also found in Syria and in Egypt. The Ancient Egyptians had a vital connection with nature and hieroglyphs record many palms, papyrus and lotus.