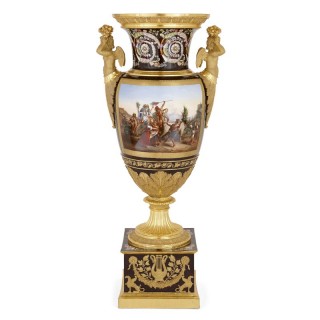 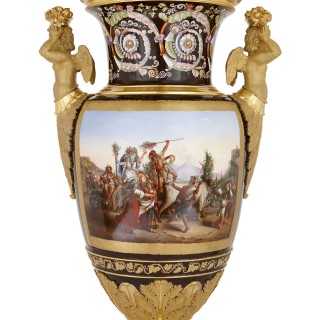 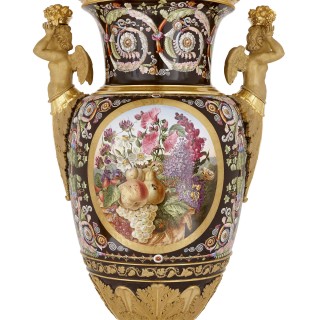 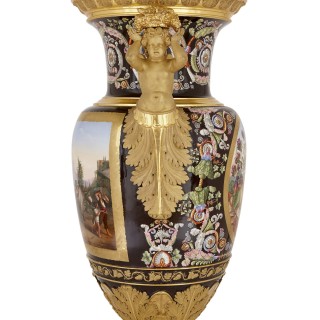 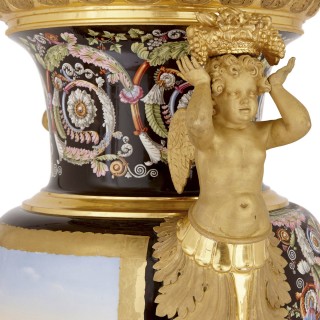 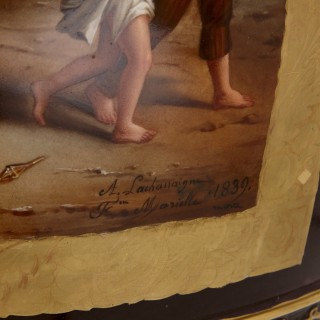 This monumental porcelain vase is an exceptional piece of Paris porcelain dating to the late 1830s. The large ovoid vase is exquisitely decorated, delicately parcel gilt and painted throughout its entire surface.

The front of the vase is painted with a portrayal of Louis Léopold Robert’s “The Pilgrimage of the Madonna of the Arch,” painted by Robert in 1827 and housed in the Louvre thereafter. The depiction on the vase is by the preeminent porcelain painter Louis-Ferdinand Lachassaigne. The work is signed and dated ‘Lachassaigne / 1839’ and is contained, on the surface of the vase, by a gilt rectangular cartouche. The reverse of the vase features a painted still life of fruit and flowers, dated to 1839 and indistinctly signed, contained by a gilt oval cartouche. The brown ground of the vase is richly painted with polychromatic floral motifs. The flared neck of the vase rises to a gilded rim, and the shoulder of the vase is mounted with porcelain handles, each one taking the guise of a cherub holding aloft a basket of produce and fruit.

The body of the vase is raised by a porcelain socle, which in turn sits upon a square porcelain base. Each side of the base is decorated in a conforming manner: two sides feature collections of classical motifs, such as laurels and lyres, all highlighted in gilt, while the other two sides are painted: one side with a scene of a goddess reclining in a landscape, and the other with a still life by the same artist who painted the comparable scene on the body of the vase. This work, too, is dated to 1839.